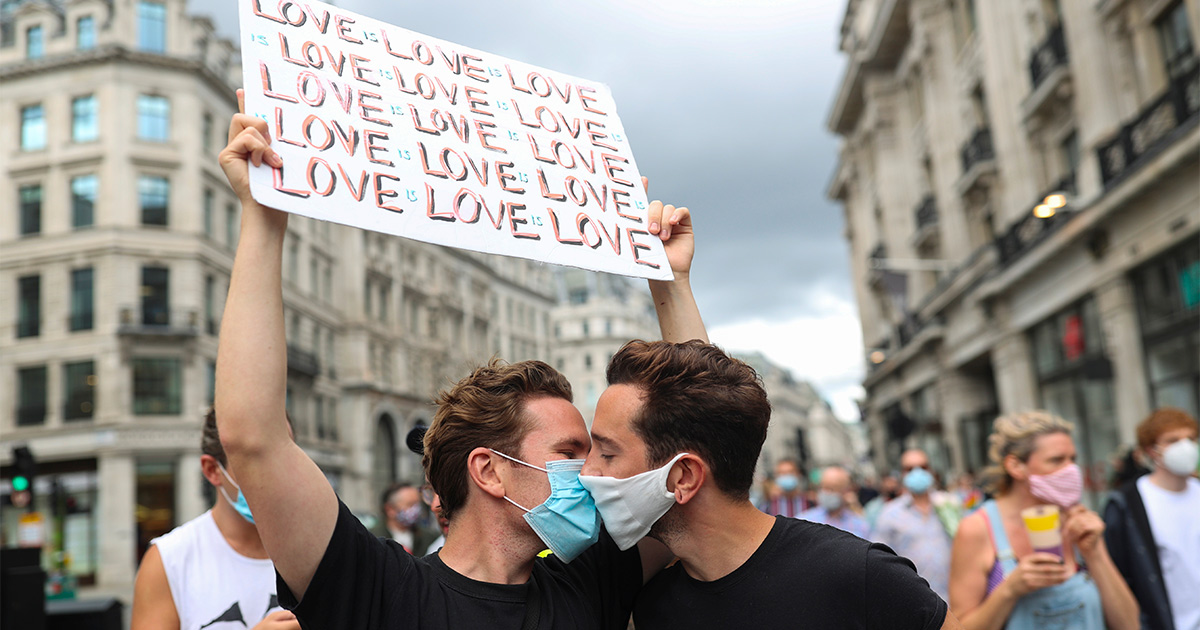 Two girls eat ice cream sitting in a square in an Italian town. They chat, maybe they hold hands, maybe they kiss. Suddenly a group of boys passes. They yell at them: "you make us sick! It was better during Hitler's time when people like you were burned". Then they pass from yelling to chasing and threatening them with a knife while the two girls flee to seek shelter.

A man is walking in front of the public library in his town. He sees a boy in his thirties in front of the building, and he gives him a look. When the boy notices it, anger explodes: "Fucking fagot, what the fuck are you looking at?!". Threats of physical violence follow, to which the man responds by lowering his gaze and accelerating his pace.

The journey from school to home has become torture. Every day she is followed by a group of kids on bicycles who shout "hey, shemale!". They frighten her and make her even more confused: "at that time I still didn't know anything about myself, I felt violated, frightened, and out of place. I no longer wore short hair".

These above are scenes of daily life for LGBT people in Italy today. Hate episodes, often accompanied by threats or actual violence, remain below the threshold of visibility. These are only three of the anonymous testimonies that appear in the Hate Crimes No More Italy report, published on May 17, on the International Day against Homophobia, Biphobia, and Transphobia. It is the result of research conducted by the Centro Risorse LGBTI, an association that deals with discrimination and violations of human rights against lesbian, gay, transgender, and intersex people in Italy.

"We have been collecting reports of episodes of this type for years," says spokeswoman Valeria Roberti, "but so far we have done so only through local associations, while this research is based on an online survey that was intended to bring out cases that otherwise we would not have been able to intercept”. These are spontaneous testimonies, collected through an anonymous online questionnaire, which are not necessarily representative of the whole phenomenon, but which allow a glimpse of the spread of crimes against LGBT people. They do not reach the police, they do not end up in the newspapers, sometimes they reach some local associations, but otherwise, they are invisible.

These are hate crimes for which a new law against homo and transphobia would apply. The law proposal has been deposited in Parliament on 30th June and is being discussed during the summer. The bill, whose first signer is Alessandro Zan of the Democratic Party provides for increased penalties if the perpetrator of the crimes is deemed motivated by reasons related to gender (in this case, it is misogyny), sexual orientation or to gender identity.

Violence and hatred below the radar

In six months of data collection, the Centro Risorse LGBTI recorded the stories of 672 people. "They are not a huge number, and we believe that there is still a great deal that does not emerge, but still they offer a photograph of reality". A photograph that matches the sensations that come from the various LGBT associations scattered around the country. And that resonates with the reports of episodes of verbal and physical violence that end up in the news. Arcigay, the Italian national association for LGBT people collects them from newspapers throughout Italy. In the last five years, the episodes have never been less than 100 per year. 2016 is seen as the first reference year because, as we are told several times by the interviewees and as many documents that come from the world of activism point out, it was an important year, which saw the Cirinnà law entered into force. It was the first national law to deal with the rights of the LGBT minority, even though it was “only” the legal recognition of same-sex relations. To some, it seemed like the first step in a process of acceptance and recognition, but the numbers of violence in the following years showed that progress has been limited.

The data collected by the Centro Risorse LGBTI give a more precise idea of ​​what the new law proposal is trying to fight: giving a little more consistency to the concept of active contrast of discrimination and violence towards LGBT people. It is a kind of hatred that is not limited only to words and threats: in 82 cases it is accompanied by physical violence, in 5 with rape, in 14 with sexual assault, in some cases in armed attacks.

The most disturbing figure is perhaps the one concerning the percentage of reported episodes: only 6.7% of the cases collected and documented by the research have been reported to the authorities. It corresponds to 45 out of 672 reported episodes. The fail in reporting can be read as a sign of distrust towards the police.

Even the police’s Observatory for Security Against Discriminatory Acts (OSCAD) database, is not very significant for understanding the spread of violent discrimination. On the one hand, as long as there is no specific crime or aggravating circumstance, there cannot even be statistics. On the other hand, the victims do not report their case to the Observatory. In fact, among the cases collected by the Centro Risorse LGBTI, only 1.6% of the total ended up in the OSCAD database. You don't go to the police or the carabinieri because there is a feeling that you will not be believed, "that the facts are taken lightly" or that "they too [the police] bring me anxiety and fear", as we read in the testimonials in the report.

The roots of hatred

The distrust of law enforcement is perhaps attributable to a homo-transphobic atmosphere that distinguishes Italy, a country where 32% of respondents from the Eurobarometer (the latest edition is the 2019’s) say they are in "total disagreement” with the phrase «Gays, lesbians, and bisexuals should have the same rights as heterosexuals». The average for the European Union is 24%.

Last October, the Williams Institute of the University of California in Los Angeles published a study entitled Social Acceptance of LGBT people in 174 Countries which highlights a negative trend for Italy. The study analyses the period between 1981 and 2017 and ranks countries according to an index that represents the level of acceptance of LGBT people within the country. These are data obtained from many surveys, such as the Eurobarometer for example, which allows, albeit with a certain degree of simplification, to compare different situations and understand trends over time.

The main indicator is called GAI, Global Acceptance Index. The researchers from the Williams Institute elaborated it by analyzing opinion surveys. The result is a summary indicator, a sort of super-average, which allows you to compare the 174 countries examined. It is a photograph of the social acceptance of LGBT people, which does not necessarily correspond to regulatory protection and official recognition of rights. In the last four editions of the study, Italy has progressively lost positions: from 23rd (2000-2003) to 25th (2004-2008), and then to 27th (2009-2013) and 30th in the latest. It was not a worsening of Italy's score, which grew, going from 5.8 points twenty years ago to the current 6.4. To make a comparison, the country with the highest score today is Iceland with 8.9 points and the last one is Tajikistan with 1.6 points. What has changed is that in the countries where acceptance has grown it has increased much more than it has in Italy, which today has only one Western European country behind it, Portugal.

Digging a bit more into the Eurobarometer data something more can be found. When asked if "Do you feel comfortable with public effusions between two men or between two women?", less than one Italian out of two replied that he feels completely at ease. The can be also read like this: many that claim they are in favor of acceptance in terms of rights for LGBT people believe that a piece of gay and lesbian lives shouldn’t be lived in public, but only in private, away from public sight.

“ Many times, when a family rejects a son or daughter because they are gay, lesbian or trans, the homo-transphobic feeling disappears through understanding Simone Alliva

Asked about the reasons behind this, Valeria Roberti refers to gender stereotypes. "Even today, Italian society is extremely tied to gender stereotypes that fall within the logic of heteronormativity," explains Roberti. "Gender norms must be those we have been told: men have a certain role, women another». Fixed and apparently unchangeable roles from which descend different levels of power for men and women. «This type of stereotype is also reflected on the various LGBT identities,» concludes Roberti, «with the idea that gay or lesbian people are not enough man or woman, that a trans person is indecipherable and it is not clear why he/she decided to break these schemes».

We asked how things can change to Simone Alliva. Alliva is a journalist and has just published a large investigation on the hatred against LGBT people in Italy. He tells us that in many stories he encountered during his journey there is a common element. "Many times, when a family rejects a son or daughter because they are gay, lesbian or trans, the homo-transphobic feeling disappears through understanding, which leads to the acceptance of the other". Dialogue and mutual understanding that leads to the overcoming of the very stereotypes that, at first, gave origin to distance discomfort and rejection. "The law against homo and transphobia is needed," concludes Alliva, "and the persons found guilty must be sentenced to civil service, perhaps within an LGBT association" to foster knowledge and understanding.