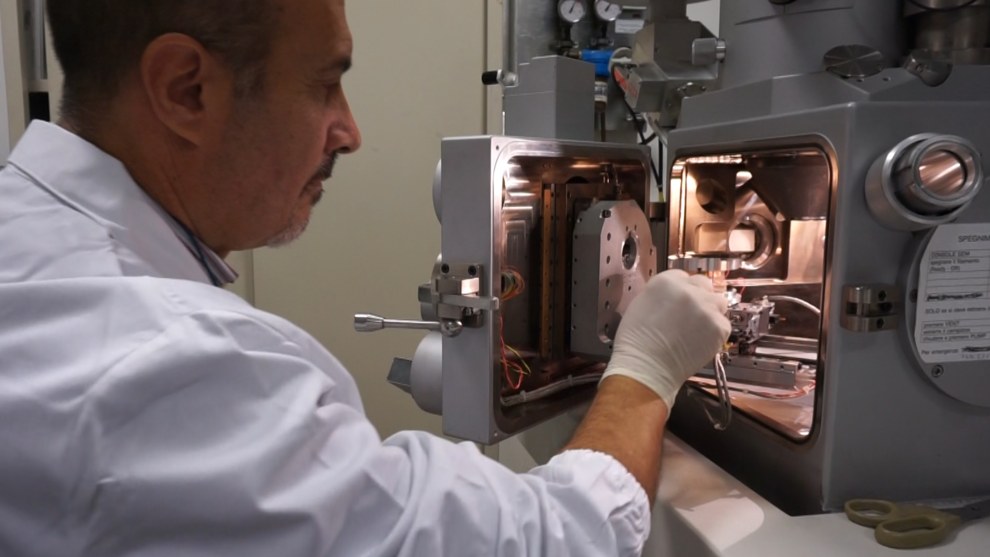 Laboratory of the Department of Geosciences at the University of Padua

It’s the largest diamond ever found in a meteorite, measuring one-tenth of a millimeter. As if that’s not enough, it should also be added that for the first time together with "large" diamonds of this type, nanometer diamonds have been identified (a diamond of one tenth of a millimeter is about 100,000 times larger than a 1 nanometer diamond), as well as nanometer graphite, iron-nickel alloys, iron carbides, and phosphorus. This association allows us to confirm the "shock" origin of extraterrestrial diamonds.

The discovery was made by an international research group coordinated by Fabrizio Nestola of the Department of Geosciences at the University of Padua and by Maria Chiara Domeneghetti of the Department of Earth and Environmental Sciences at the University of Pavia, in collaboration with Cyrena Goodrich of the Lunar and Planetary Institute of Houston, Frank E. Brenker of the University of Frankfurt, Annamaria Fioretti of the Institute of Geosciences and Earth Resources of the National Research Council of Italy, and Konstantin Litasov of the Vereshchagin Institute for High Pressure Physics of Moscow. The study was published in Pnas and is entitled Impact shock origin of diamonds in ureilite meteorites.

The scientists examined three fragments of special meteorites that contain diamonds (called ureilites), one of which came from the NWA 7983 meteorite and the other two from the so-called Almahata Sitta meteorite. In particular, a group of scientists who found “large” extraterrestrial diamonds that were approximately 0.04 millimetres in size had studied the latter meteorite between 2015 and 2018. These findings opened a deep discussion about their possible formation began. It was then, in fact that the researchers began to hypothesise that diamonds of a similar size could have been formed directly within the depths of a planet with a size like Mars or Mercury and that their formation mechanisms were similar to those diamonds that are formed on Earth. The planet within which these diamonds would have formed would then be destroyed. However, a second hypothesis proposes that the transformation of graphite into diamonds is due to a great shock impact suffered by the planetary bodies parents of the meteorites that rained on the Earth: the parent body, containing graphite, would have suffered a great impact and directly generated diamonds as a result of the sudden increase in pressure and temperature. The space collision of the parent body in the early solar system would have generated diamonds from the graphite’s transformation.

The research coordinated by Nestola fits into the debate that has now allowed us to confirm this second hypothesis. In fact, according to the international research group, both the largest of diamonds and nanometer sized diamonds were directly formed by the transformation of graphite due to one or more impacts in space. Metallic iron plays a fundamental role in this process. The authors explain that within the laboratory, it is possible to synthesize diamonds directly from graphite and that this form of synthesis is faster if metallic iron is added, acting as a real catalyst. Or, to put it another way, the metallic iron acts like “instant yeast”. 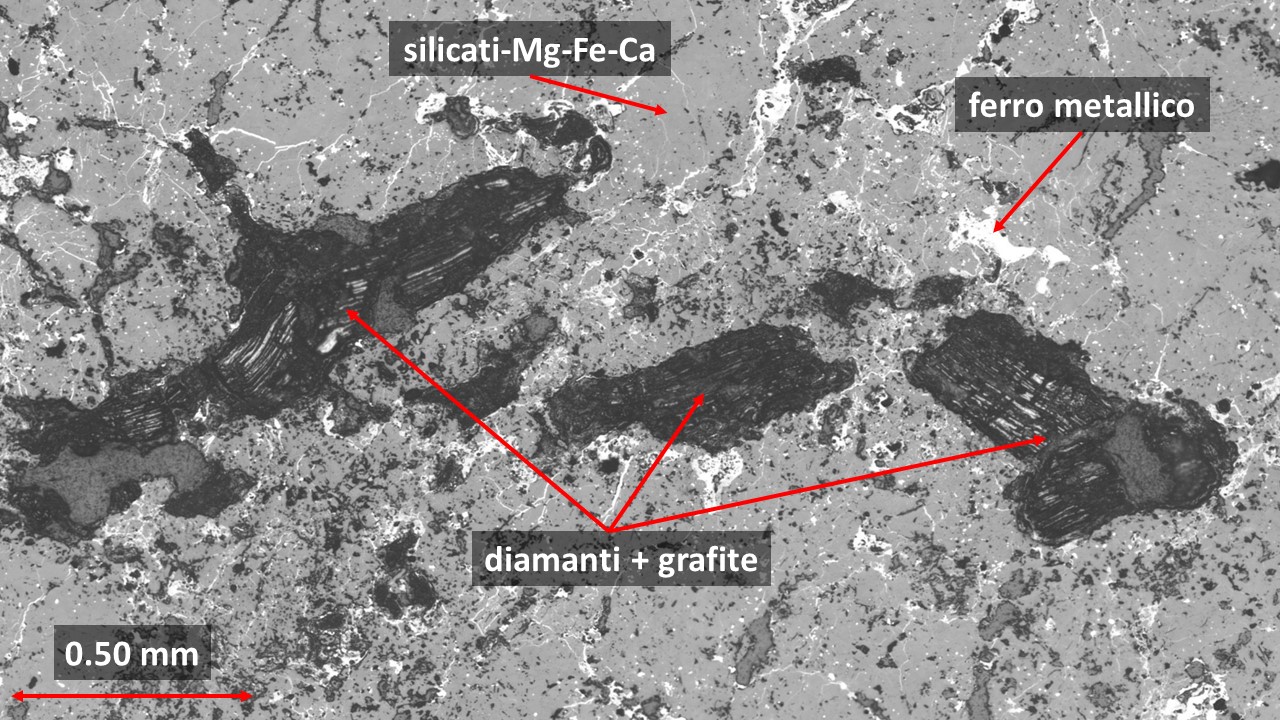 According to the scientists, the presence of metallic iron within the carbon-bearing aggregates and likely a relatively long duration of the impact (3-4 seconds) helped to “grow” diamond to at least 0.1 mm in size directly from graphite even at relatively low pressure conditions (15-20 GPa). The new results reported in the Pnas article definitively indicate that the formation of large diamonds from graphite can occur due to a shock event and, as a consequence, it is not necessary to invoke very large planetary bodies with a size like Mars and Mercury to justify the presence of large diamonds in meteorites.

The team coordinated by Fabrizio Nestola, who has been dedicated to this line of research for years, achieved another important milestone. With results that, on more than one occasion, have earned the covers of international scientific journals. As was the case in 2018 in Nature, with investigations on super-deep blue diamonds that owe their colour to the presence of boron, according to scientists from ancient superficial oceans. Then again in 2016 in Science with a new category of superdeep and super giant diamonds (called Clippir). A few years earlier, in 2014, another major publication in Nature reported a ringwoodite fragment found inside a superdeep diamond from Brazil that showed a significant water content and suggested that the amount of water present inside our planet was three to four times higher than what had been believed up to that point. Once more, thanks to diamonds, another important element has been added to our knowledge.