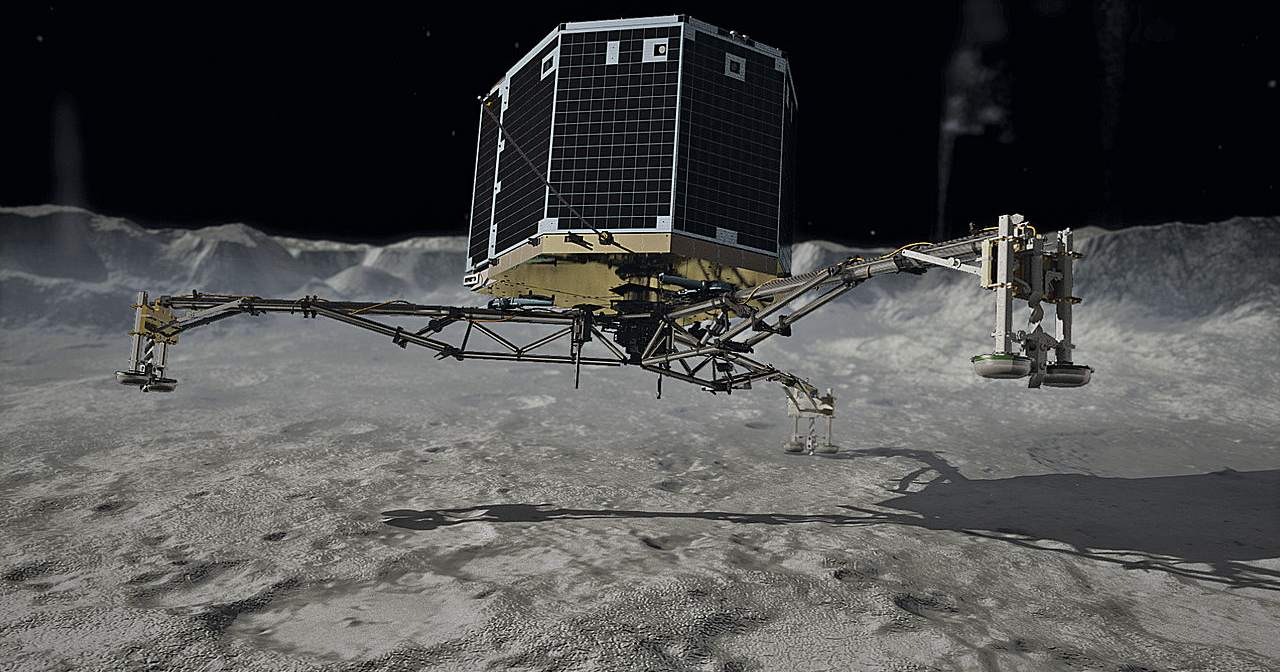 Do you remember the Rosetta mission? It came to an end some time ago, 2016 to be precise, but still there remain moments in its journey that will endure over time. Like that of November 12, 2014, when the lander Philae touched down from the probe onto the 67P / Churyumov Gerasimenko comet and bounced several times on the surface before anchoring. Traces of it were lost until the Italo-German Osiris camera managed to identify its location in the Abydos region. The difficulties were attributed to the positioning of the Rosetta as it released the Philae lander and to a possible problem in the small engine designed to counter the recoil of the harpoons of the module once it landed the surface of the comet. Today, however, a study published in Pnas (Global-scale brittle plastic rheology at the cometesimals merging of comet 67P/Churyumov–Gerasimenko) allows us to formulate new hypotheses, not only on that particular event but on the more general evolution of our solar system. According to the results obtained by the team of researchers, comets are not "soft" aggregates, as has been so far believed, but that they have more rigid bodies than expected. And when the mission was planned this was still unknown. 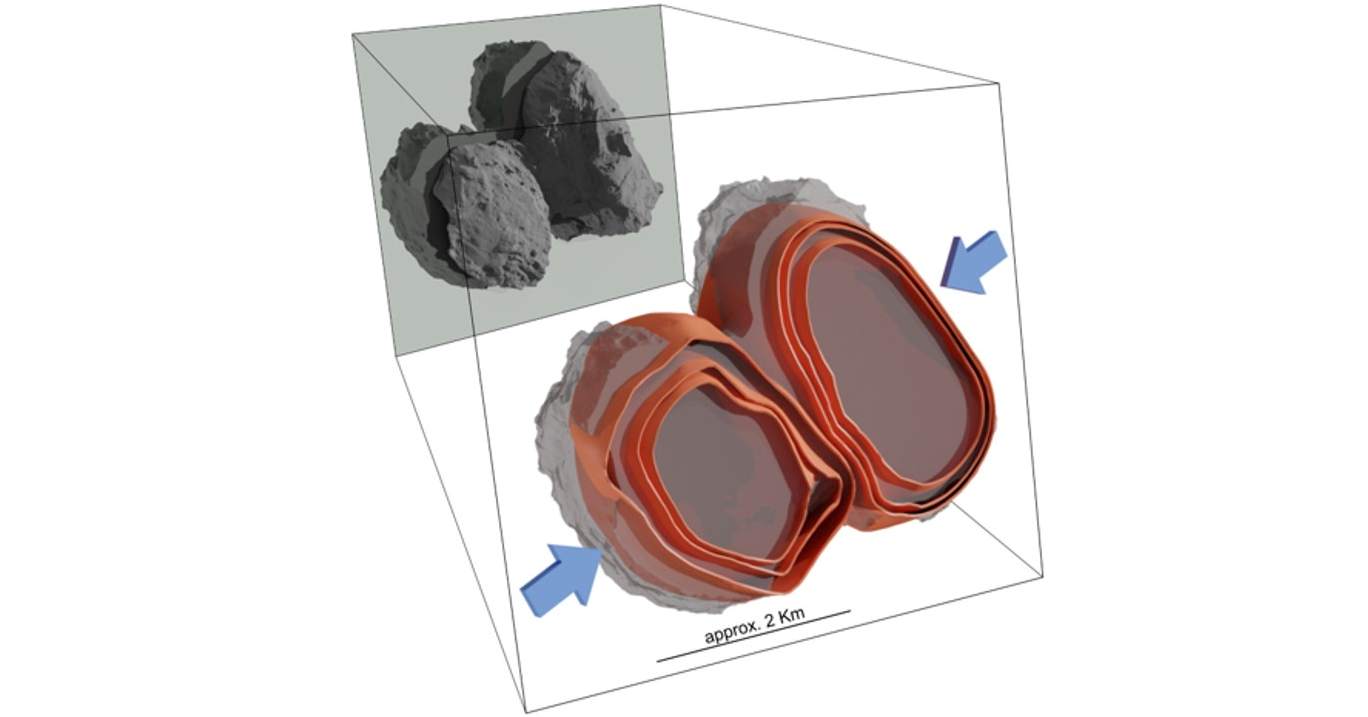 Section of the 67P/Churyumov Gerasimenko comet that shows a model of the layered structure of the two lobes (only some layers are highlighted). Layering shows obvious deformation

“With this work – explains Matteo Massironi, geologist of the University of Padua and coordinator of the European Planmap Project (Planetary mapping project), where the study took place – we added an important element to our understanding of comets and the results we found called into question many of the hypotheses previously made in regards to the mechanical characteristics of the comet nuclei which was thought to be mostly soft, almost like an impalpable aggregate. However, many small bodies in the solar system could be much more rigid than we might think, and this changes our understanding of the dynamics that can occur between these objects, including collisions”.

Scientists analysed the nucleus of the comet 67P / Churyumov Gerasimenko, using three-dimensional geological modelling techniques applied to the data collected by the Rosetta probe. “Previous research – says Marco Franceschi, geologist of the University of Trieste and first author of the article – has shown that the comet is formed by two lobes and is internally constituted by concentric layers”. Referencing a study published in 2015 in Nature, coordinated by Massironi, which showed that the comet in question derived from two distinct bodies that joined together following a 'gentle' low-velocity collision. Also, the stratifications were visible on some points of the surface of the comet, making it possible to reconstruct the internal structure of the body as onion-shaped with variable thickness due to the irregular contour of the comet itself. 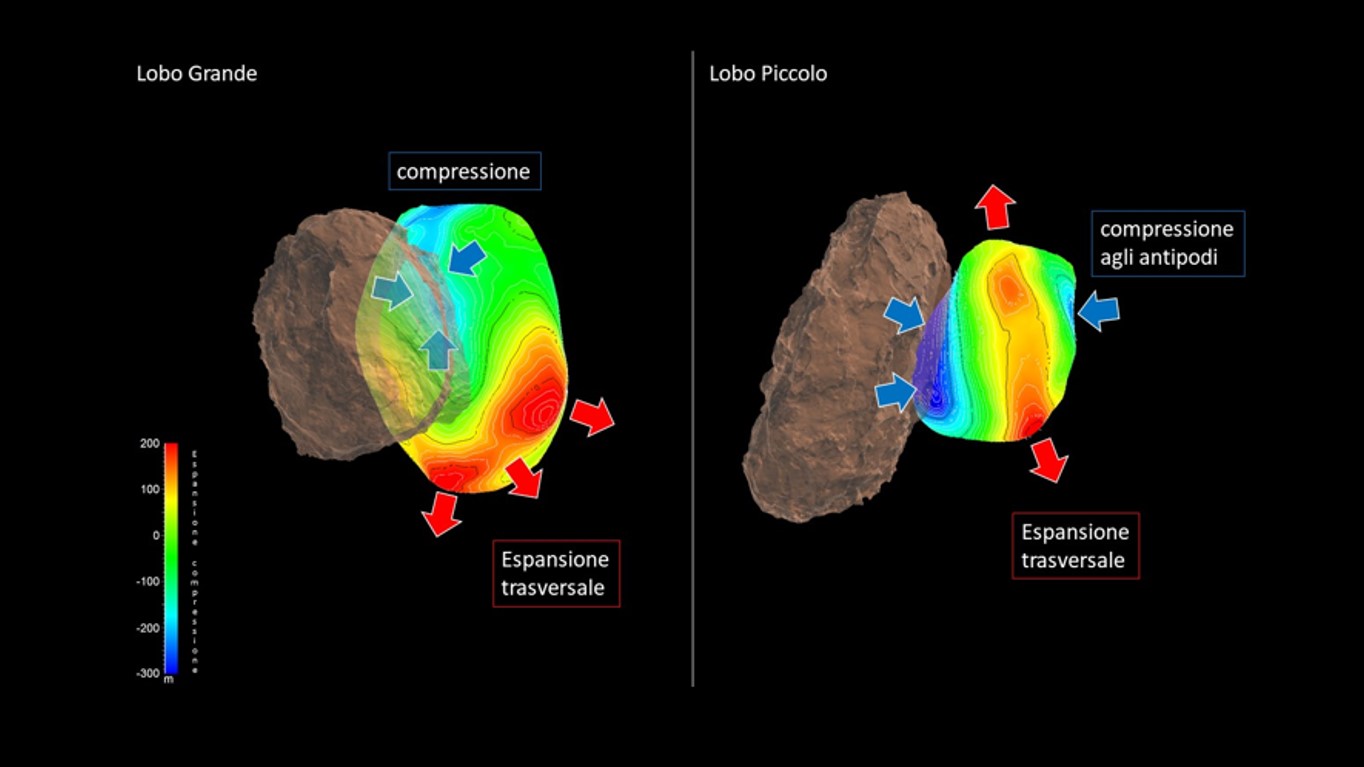 “Observing the emergencies of the layers – continues Franceschi – we have developed a three-dimensional model of the comet’s structure that has allowed us to highlight the existence of deformations including folds in the layered structure that affect the entire cometary body, that is not distributed randomly". The onion, in essence, was "dented" in several places.

This allows researchers to make some considerations. “Until now – Massironi says – it was believed that comets were made of "soft" material because they have very high porosity (up to 80%). Therefore, they are aggregates containing many gaps. This implies that a body of this type, when it encounters another object at a certain speed, tends to absorb the deformation and compacts itself because the vacuum gradually begins to disappear due to the compression of the encounter”. On the other hand, when the 67P / Churyumov Gerasimenko comet was subjected to impact, such as when one lobe met another, a general deformation took place. “There has been a crushing and a simultaneous expansion perpendicular to the crushing, and this has caused many fractures. This is not the expected behaviour of a soft material, such as foam or snow, but rather the reaction of a rigid material.”

To try to explain these unexpected results, scientists hypothesize a binding action carried out by ice and organic compounds which, among the materials that make up the comet, are capable of accounting for the rigidity necessary to determine the deformations observed.