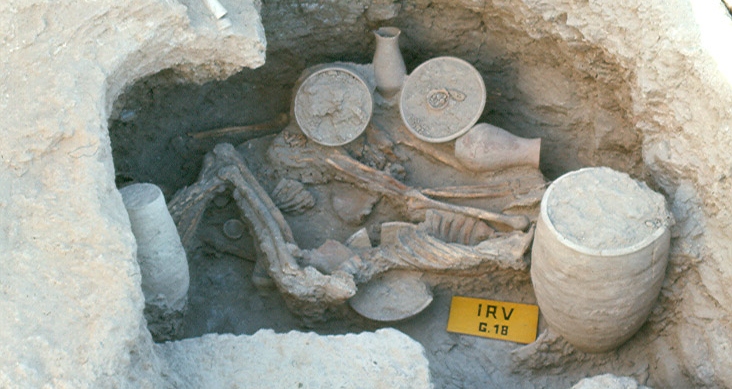 Published in Science with a collateral communication in Cell (of a single individual from the ancient civilization of the Indus Valley, 3rd millennium BC), the study is the largest ever carried out on ancient human DNA in largely from the Eurasian continent.

The archaeogenetics project that took several years was led by David Reich of the Department of Genetics at the Harvard Medical School in Boston, MA, USA. The project included the participation of a large pool of research centres including that of The University of Padua’s Department of Cultural Heritage Professor Massimo Vidale and the ISMEO of Rome.

The study investigated the prehistory of southern Eurasia (from the Mediterranean to Asia Media, and India) that abandoned the hunting and gathering ways of life about 12,000-10,000 years ago, due to the advent of pastoralism and agriculture, and the development of sedentary villages and then cities, which would finally spread the Indo-European languages found over the last 4000 years.

Have migratory movements of populations accompanied these epochal changes, or rather, by the spread of ideas and the indirect impact of new economies?

The answer given by the study published was found by analysing the DNA of 524 individuals belonging to different ancient Eurasian populations, which was then studied together with 269 new radiocarbon dates.

The analysed populations came from different macro-regions including; ex-Soviet Central-Southern Asia, Afghanistan, and the Iranian Plateau (from 12,000 BC to the modern age), the forests of western Siberia (around 6400-3900 BC), the immense expanse of the Great Steppe found in Central Asian (3400-800 BC), and the mountainous regions of northern Pakistan (1400 BC - 1700 AD).

The first part of the story concerns the last 12,000 years and the origins of sedentary life and agriculture. The data confirms that European Neolithic farmers descend from the populations of Anatolia, present-day Turkey. The same descendants, in the same period, are found as the first farmers of the Iranian Plateau and Central Asia. Until the threshold of the third millennium BC, the presence of this component, among the ancestors analysed, decreases with a gradual trend over time (known as cline).  It also decreases in the amount of space it occupied as one crosses the Iranian Plateau to the east towards Afghanistan and Baluchistan. This shows that the well-known spread of the "parcel" of plants and animals of Middle Eastern Neolithic agriculture corresponded to the migrations of people who mixed with various local societies, moving not only towards the west, but also towards the east.

Between 2500 and 1800 BC, the urban populations of the great Oxus civilization originated from what is today the Amu-Darya River in Central Asia. This group mostly shared the genetic ancestry of the farmers of the Iranian Plateau and to a lesser extent the Anatolian, which is a sign of evolution.  This purely local adaptation was abruptly interrupted at the end of the third millennium by the mysterious abandonment the urban centres of the region.

In the framework of "a failed urbanization", the study also considered the spread of Indo-European languages and the role of the nomadic Yamnaya culture of the Copper Age. From the threshold of 3300 BC onwards, the Yamnaya had spread to a vast area ranging from Hungary to the Altai Mountains that rapidly replaced previous Iranian-Anatolian genetic profiles.

The original nucleus of this diffusion, which proceeded symmetrically towards the west (Europe) and the southeast (India) is found in the plains between the Black Sea and the Caspian Sea.  Scholars had long indicated this as the land of origin for archaic Proto-Indo-European linguistic communities.

University of Padua Professor Massimo Vidale says, "We can now discard the previous hypothesis, according to which the Indo-European languages would have spread from Anatolia together with the so-called Neolithic Revolution. It was instead a much later phenomenon, linked to the migration of the nomadic shepherds of the steppes 5000 years ago. As Europeans, we are perhaps all children of the steppes."

This would be the "first engine" of the expansion movement that before 2000 BC seemed to have altered the genetic heritage of European populations radically up into Spain. Although this was already known, we must include Asian shepherds from the steppes as ancestors.  With an excellent archaeological correspondence, the change coincides with the spread of prehistoric villages that used an unmistakable "campaniform" shaped vase. These populations, from the genetic point of view, have nothing to do with the Central-Asian nomads of the Iron Age (Scythians, Sarmatians, Kushans, and Huns) who have a precise and later Asian-Eastern ancestry.

What about India? The reconstructions are impacted by the scarcity of archaeological-genetic data available for the great urban civilization of the Indus Valley (Pakistan and north-western India, around 2600-1900 BC). To date, the only individuals studied in the Indus valley (article published in Cell) on the one hand seemed genetically linked to the Iranian-Anatolian farmers and on the other, to the ancestral populations of the Indo-Pakistani subcontinent. From 1500 BC onwards, as was the case in Europe, the ethnic formation of the Indian world was deeply impacted by the arrival of the genetic component of the shepherds of the Central-Asian steppes from the north-west that is instead absent in today's populations of southern India.

The ancient and modern populations of the valleys of northern Pakistan instead determine the ancestry of the steppes. Furthermore, and to a high extent, the ancestry of the steppes shepherds of the Late Bronze Age (around 1400-900 BC) still seems to be found in the members of today's Brahminic castes.  The Brahmins are those at the top of the Indian social system who are seen as traditional guardians responsible for teaching and maintaining sacred knowledge, bound through the practice of endogamy (marriage within the same caste) and the liturgies of Sanskrit.

Professor Vidale underlines the coincidence is all the more surprising if we consider that the most ancient sacred texts of Hinduism, the 10 books of the Rigveda, also known as the Mandalas, tell of the arrival on the plains of the Indus and then of the Ganges of bands of aggressive nomadic shepherds with metallic weapons who arrived from the Afghan hinterland.

Linguistically, the scenario of this flow and ethnic change appears much less hypothetical traditionally placed by linguists immediately after the threshold of 1500 BC.

The new data confirms that the genetics of ancient DNA will help us build an ever more articulated, and more coherent, story in which linguistic phenomena, material culture, and biological aspects integrate sensibly. Contacts and cultural exchanges seem to find precise ethnic discontinuities that previously seemed very uncertain and blurred more and more. All this confirms the constant mixing of people and the most diverse human groups that characterize the history of our species.