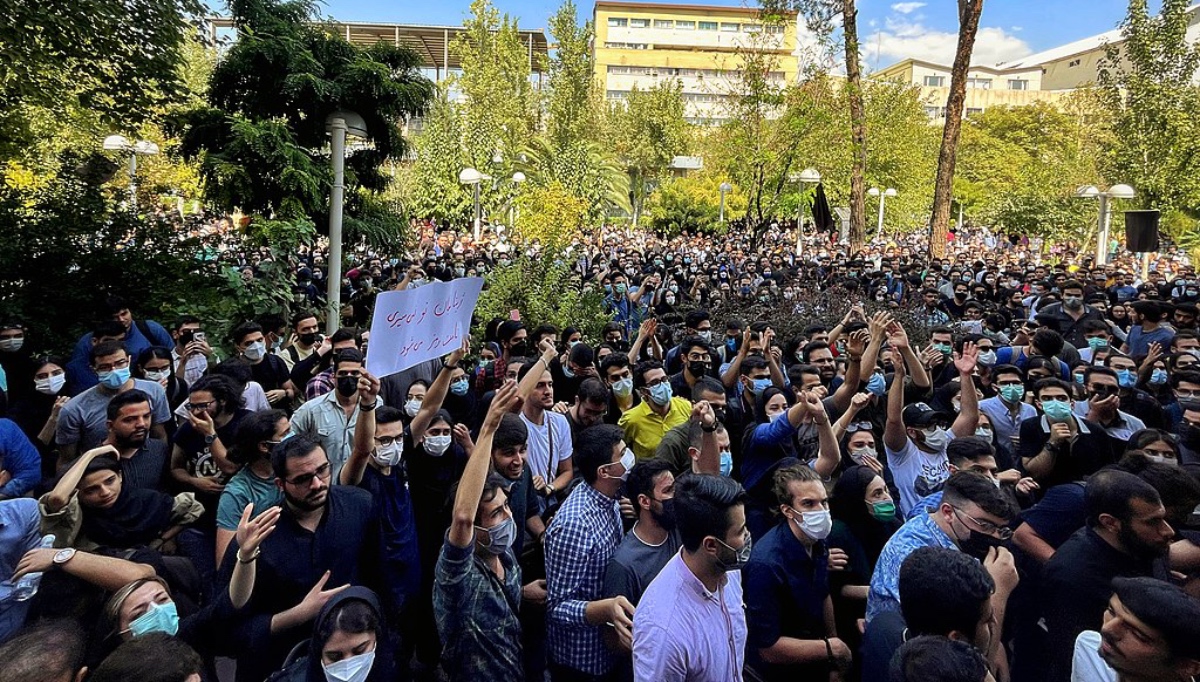 “Of course we’re afraid. We know the risks but we also know that if we manage to change things we can live a different kind of life, a life without constraints that limit every aspect of our daily life. This is why we young people are the driving force behind these protests: we know that we have more to gain than to lose.”

This is the voice of an Iranian student, a young lady pursuing her university career in Padua. Our conversation includes other Iranian students, some are PhD students, others are working towards Master's degrees, but they have all chosen the University of Padua for their studies.

They are all following what is happening in Iran, reading through the filtered lens of online news and social media as Iranian authorities cut off access to mobile internet networks and platforms such as Instagram and WhatsApp. Amid the protests, the Iranian regime seeks to hide the violence committed by the so-called moral police on demonstrators, making the flow of information more difficult to access. But such efforts have not prevented the circulation of videos of the protests and the blatant repression of the Iranian government. One of the students shows me a photo and a video of a friend. The images show a young girl bleeding, she is slouched over a stretcher, the result of a severe beating suffered by the Iranian security forces during the demonstrations, leaving parts of her body marked with deep wounds. Another image portrays a girl with a bruising that extend over almost the entire right thigh. These protesters, who despite their need of medical attention, do not go to hospital, for fear of being subsequently taken to prison.

Images like these represent at least 185 victims and thousands of arbitrary arrests. Photos and videos crudely testify to the ferocity of the repression put in place by the regime to block the wave of protests triggered by the death of Mahsa Amini, the 22-year-old of Kurdish origin who died two days after being arrested while on vacation in Tehran with her family. Amini was taken into custody by the moral police, because they claimed she was not wearing her headscarf correctly.

Her death is the result of a violent beating she endured despite the government’s continued argument that it was due to natural causes. Amini’s death has become the symbol of the oppression to which women living in the Islamic Republic of Iran are forced to bear. First, we speak of the headscarf, introduced at the end of the Khomeinist revolution. Wearing of the headscarf became mandatory for women in 1981, followed with further tightening of the rules over the next two years. But the headscarf is only the tip of the iceberg. They are pieces of fabric used as veil for through which a religious and political system controls women, but this tyrannical system also masks its men. Now, the bodies of these women have become Iran's most crucial political battleground. "They want to control every aspect of our lives, from the moment of birth until that of death," the students explain.

Meanwhile, the wave of protests in Iran continues.  Four weeks after the start of the first demonstrations, the map of cities in revolt extends and in addition to squares and universities, demonstrations spread to high school students. To challenge the supreme leader Ali Khamenei, these teenagers are unprecedented actors in the 44-year history of the Islamic Republic. They belong to a different generation, more impervious to state propaganda and more courageous in challenging it.

Padua’s Iranian students remind us that these are not the only elements distinguishing protests from those characterized in Iran’s past. They remind us that what could ignite the engine capable of bringing about real change this time it is not about politics (as opposed to the protests in 2009-2010 that were characterized by the strong suspicion of electoral fraud at the expense of the moderate candidate Mir-Hosein Musavi and the re-election of Mahmoud Ahmadinejad.) Nor are they due to economic factors, such as the demonstrations in 2017 and 2019 linked to price increases of basic necessities and fuel costs.

The roots of these demonstrations are based on social and cultural change, a change that can no longer wait. And perhaps for the first time, the men of Iran have embraced the change with conviction as they stand side by side with Iranian women. The men's national football team recently covered their shirts with black vests during the Iranian anthem before an international competition.  Such a striking gesture was embraced by the boys and men who support and protect women. The same women who continue to protest by uncovering and cutting their hair.

The conversation shared between the Iranian students in Padua is perfectly consistent with the ideas proposed by the poet and University of Pennsylvania professor Fatemeh Shams during her interview in the New Yorker. It is a protest movement that starts from the bottom. This is a protest without reference to a political figure, like those in the past who were arrested or marginalized as they carried reformist or moderate demands. At that time, these politicians welded greater power but yet failed to bring about a loosening of Iran’s theocratic regime. This time, we have a protest that yields its power from its spontaneity, this kind of revolt is harder to control because the government cannot crush it by persecuting a single leader.

An important element is the fact that although the protest has a strong female identity, as witnessed by its slogan “Woman, Life, Freedom,” we see a change in the gender-related norms as Iranian men stand side-by-side women. And then we see events that involve large cities as well as small villages as they move beyond ideals based on ethnic groups, demographic groups and social classes. And although rare, but rather significant, some riot police have joined the protesters themselves.

I call an all woman in the world to support our Revolution against gender apartheid.#MahsaAmini pic.twitter.com/vI7noIkXYT

What we note is the monotonous and repetitive patterns with which the regime tries to delegitimize the protests.  Defining those who protest with the usual false narrative said to be orchestrated by the United States and Israel. Control and censorship through blocking internet access and shutting down the few social media outlet that had not already been previously banned and mitigating a propaganda that is commonly aligned with the media through extorted confessions gained by threats and violence. Among the most striking examples is that of Sepideh Rashno, a writer and artist who was arrested in July for not respecting the dress codes imposed by law (exacerbated this summer by the new decree signed by the ultra-conservative president Ebrahim Raisi).

And then there are the attempts to deny that there is the hand of the Iranian security forces behind the killing of some young demonstrators who would soon become, like Masha Amini, powerful symbols of courage for those who demand change. Among them the sixteen-year-old Nika Shakarami, whose lifeless body was returned to her family on the first of October, ten days after her disappearance while attending to the protests on Keshavarz Boulevard in Tehran. Authorities say she fell from a building and prevented the family from burying the young woman in her hometown. The wounds on the face of the young woman, who shortly before had written in a last message to a friend that she was being chased by the security forces, tell a completely different story. The same fate placed on yet an another sixteen-year-old girl, Sarina Esmaeilzadeh, who like Nika, the Iranian authorities has said fell off the roof of a building.

Such episodes reinforce the protests, leading demonstrators to be more and more vigilant about the need to move forward. "A government that deliberately kills its citizens has no reason to exist," said the Iranian students who agreed to speak with Il Bo Live, as they add, "greater attention is needed at the international level and a complete awareness of what is happening in our country. In Iran there is a very high degree of corruption and yet the system continues to take an interest in women's hair.”

"Be our voice," asks the Iranian student network of Padua. And while after almost four weeks of revolt in the streets and squares, repression is more apparent, while demonstrators cease to step back but rather resist even at the cost of their own lives. Meanwhile, the University of Padua officially expressed solidarity with "Iranian students enrolled in Italian universities and more generally with all Iranian women and the many young Iranian men who are courageously protesting these days, " and a strong signal of support and closeness has come from the streets around the world.

"It's just a matter of time.  Even if nothing changes, the chance for change will return in a few months," declares one girl. As those who report and observe, it is evident that the theocratic regime has lost much of its popular legitimacy, which could lead to major developments in the future.