Having explored the pillars of ecological economics, a theory that stands as a radical alternative to the mainstream socioeconomic model, we tried to set aside theoretical reflections and venture  out in the real world, exploring, through the words of our guests, how ecological economics can be put into practice.

Adopting the ecological economy perspective means, above all, recognizing the complexity of the situation under consideration by examining the multiple factors and actors involved and considering their potential incommensurability. The principles of ecological economics are a useful reference point especially for policies aimed at the protection and restoration of ecosystems, as well as in those cases where it is necessary to harmonise social and environmental needs.

In this episode, moving from the field experience of our guests, we look at two way of applying ecological economics to balance human and natural needs. Roldan Muradian – professor at the Universidade Federal Fluminense in Rio de Janeiro and current president of the ISEE (International Society of Ecological Economics) – discusses the implementation of the ‘payments for ecosystem services’ system in Latin-America; Tatiana Kluvankova, professor of Management at the Slovak Academy of Sciences, presents a European experience on the governance of the commons.

Private economic interests and the protection of the common good are rarely aligned. The capitalist approach to the natural world, which considers the latter as a huge reservoir of resources to be exploited as extensively as possible, is a striking example of the conflict that arises when private and collective interests, short-term and long-term needs, come into conflict. This is the case of economic activities that have direct negative effects on ecosystems, such as harvesting of timber or livestock, both of which cause deforestation. The system of ‘payments for ecosystem services’ seeks to overcome this contrast not with coercive methods aimed at the repression of environmentally harmful behaviour, but, vice versa, by applying an incentive mechanism for virtuous behaviour.

«In short, payments for ecosystem services are financial incentives put in place to encourage landowners to provide ecosystem services to the whole of society. The latter are the benefits that society as a whole, and especially economic actors, receive from natural ecosystems», Muradian explains. In other terms, it’s a stimulus offered by the public to the private sector to compensate for potential economic losses resulting from the commitment to provide benefits to the community. «Let's take a specific case: we could ask a farmer who keeps his animals on pasture to reduce the number of animals in order to limit the impact of grazing on the forests, thus allowing them to regrow. Forest ecosystems, in fact, provide a number of ecosystem services: in such case, the aim of the payment is that, through concrete economic aids, it increases the likelihood of reconciling land use for private purposes with the interests of the community».

Such a measure, which seeks to harmonise contrasting interests without neglecting the complexity of the socio-environmental context in which they occur, has its pros and cons. «Payments were introduced in an attempt to find non-coercive tools for regulating the exploitation of the environment and its resources», the ISEE president recalls. «It is a market mechanism aimed at creating direct incentives to reduce the pressure on natural resources: this strategy is, at least in theory, a win-win solution, as it allows landowners to improve their environmental performance and, at the same time, to have an economic gain».

On the other hand, this approach showed some shortcomings: «The main downside is the difficulty of applying these measures on a large scale, for instance on a national level: we are experiencing this directly in a country of continental dimensions like Brazil. There is also the burden of such a measure on the public budget: paying all landowners to ensure that they ensure the provision of ecosystem services would have exorbitant costs».

Nevertheless, this system is becoming widespread throughout Latin America: as Muradian points out, « there are several cases of implementation of these systems in this region. Payments have been developed in different ways according to local needs; nationwide implementation experiments were also conducted, as in the case of Costa Rica».

Such a continental-scale ‘laboratory’ is extremely interesting, and is offering many insights into the effectiveness of these systems. «Regarding the success of such initiatives, the debate is still open: to be truly effective, payments for ecosystem services should induce, in those who receive them, far greater changes in terms of virtuous behaviour and good practices than the ones observed in those who do not receive this kind of incentives. Since assessing such parameters quantitatively is not easy, it is not yet completely clear whether or not the payment scheme is productive». 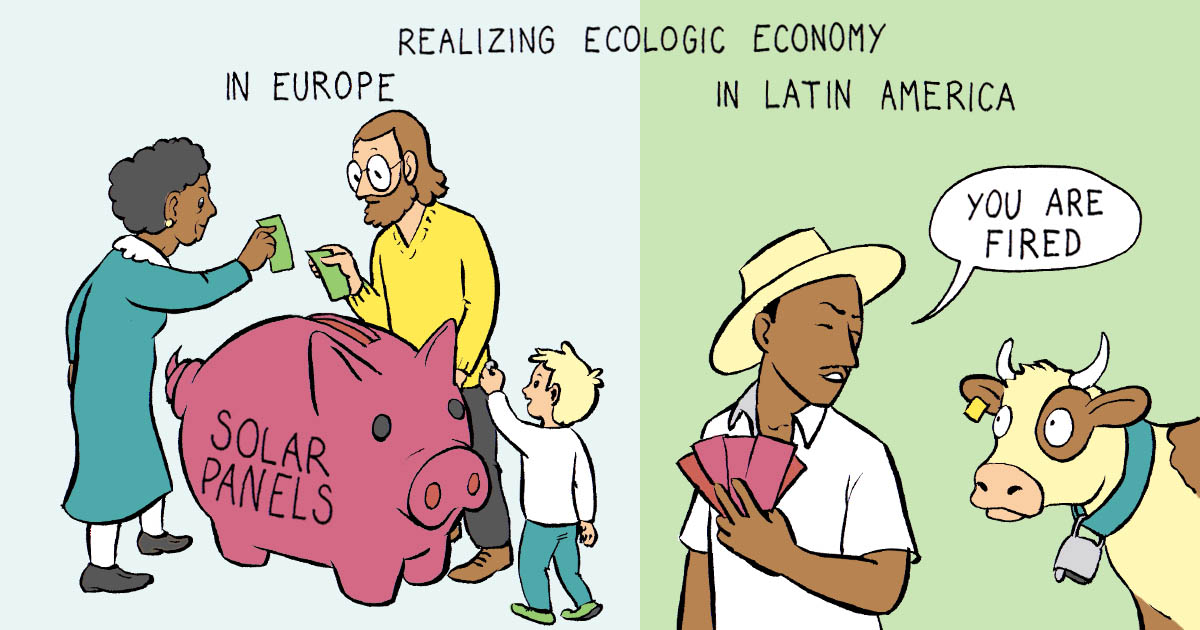 Crossing the Atlantic, we move on to Europe, that for some years now has been – albeit with mixed fortunes and attracting some criticism – a world champion of sustainability and green transition. The Green New Deal, approved in 2019, aims to change the production system to make it both environmentally and socially equitable. One of the most urgent challenges facing the European Union today is the energy transition, an issue made even more pressing by the difficult international political situation. «An essential point that is still missing from the European approach to sustainability», Kluvankova says, «is the recognition of the importance of the principles of thermodynamics in the functioning of the economic system, as already highlighted in the 1970s by Nicholas Georgescu-Roegen, one of the fathers of the ecological economy. Yet thermodynamics is, albeit implicitly, a founding pillar of the circular economy approach: on closer inspection, the slogan ‘reduce, reuse, recycle’ is based on the entropy law, and emphasises the need to reduce the energy use and waste creation. This approach is diametrically opposed to the view adopted by conventional economics, which considers the environment solely as a reservoir of resources and the ultimate destination of our waste».

«Furthermore», professor Kluvankova continues, «ecological economics teaches us to adopt socio-ecological systems as a privileged unit of analysis: by introducing the themes of energy, production and waste management within this concept, it is possible to foresee the outline of a new economic model, based on a conception of growth that is no longer quantitative, but qualitative».

The European Green New Deal is particularly promising in this respect, according to Kluvankova. Approved by all EU member states and immediately translated into the national Recovery Plans, it could also have a profound impact on a local scale. In many cases, for the envisaged measures to be effective, it is necessary to establish collaborations with the inhabitants of the territories, involving them directly in order to implement the principles of sustainability synergically. «Collaborating with local communities is essential: for this reason, I believe that improving the quality of life of local communities and encouraging their active participation are central elements to ensure that sustainability and environmental protection policies can be successful».

«Moreover, I believe that is important to stress », the professor continues, « that, as is the case with payments for ecosystem services, we focus more on behavioural change, at both the individual and collective level». In this regard, it can be useful to apply smart governance methods and promote the creation of so-called ‘smart communities’, that are «local communities in which technological solutions, social capital and tools such as virtual media are combined: as Elinor Ostrom suggested, self-organisation is a particularly effective management and governance system. It will be interesting to discover how, in the near future, smart communities will meet the challenge – amplified by the environmental crisis – of a fair and sustainable management of common goods».

Regardless of the place where they take place, the examples described by Muradian and Kluvankova have at least one point in common: the centrality of collective and bottom-up actions. According to Kluvankova, grassroots engagement is experiencing a new renaissance today, as it can benefit from meeting places: «Today, a community no longer needs to find roots in a territory, to share certain natural resources. Smart communities do not have to be local, but can take the form of virtual communities, thus adapting more flexibly to the new challenges posed by a globally extended society».

Faced with such global challenges, it is therefore necessary to learn to reconcile bottom-up needs and demands with regional and federal policies. «In Latin America, this is a key issue» says Muradian. «For instance, there are several examples of payments for ecosystem services that the State provides not to individuals but to communities, which are therefore given an identity and wide autonomy in the allocation of resources». However, the optimal balance in the distribution of responsibilities is not easy to achieve: «On several occasions, the contrast between the national and local dimensions is still evident, as is the case in Brazil, in the long-standing conflict between the federal government and indigenous peoples».

Although with very different economic and political situations, both the considered regions– South America and Europe – present not so dissimilar problems to the challenge of sustainability. In this sense, ecological economics can be a valid tool to solve seemingly irreconcilable contrasts: it offers an alternative point of view to the mainstream vision of the economy and society, a point of view that could illuminate unexpected solutions to face the difficulties of the present.