The natural world, long neglected by mainstream economic thinking, always comes back in through the back door. After all, it is the ineliminable framework in which human events can take place; it makes possible the very existence of our species and its complex social structures.

Yet, in the reductionist worldview of neoclassical economics, no place is left for anything that cannot be quantified by price, that is, for anything that cannot be easily reduced to a number or some other discrete unit. Economists have a simple solution to this impasse: ignore the differences, act as if every aspect of reality were actually conceivable as a commodity whose importance depends only on its price, or its exchange value. Among the criticisms that ecological economics raises against the prevailing economic model is precisely this issue – the fact that it has ignored the incommensurability that separates entities of different kinds, which by no means can be compared on the basis of a common monetary metric.

But when it comes to measurements and trading, the practical level also has a counterpart in the theoretical dimension. Indeed, in the economic valuation of a reality – for instance, an ecosystem – values are always involved. Those, in turn, are not absolute, but depend on the subject that ascribes them, and vary according to the social context in which the subject lives and the relationship that exists between values and entities. And even values, like objects or living beings, can be incommensurable with each other.

There is no ‘nature’

«Think about the concept of ‘nature’», says Barbara Muraca, philosopher and Professor of Philosophy and Environmental Studies at the University of Oregon (USA). «Frequently, we assume it to be a descriptive, objective and value-free notion. And yet, when you look at it closely, you realise how much history and meanings it conveys. The concept of nature, in fact, was created within Western modern culture, and is embedded in a strongly anthropocentric worldview, which traces a separation between the natural and the non-natural – i.e., humans. Analyzing other cultures shows that this is not a universal concept; many languages, for example, do not have a corresponding term, since nature is not considered as separated from the human and defined as a discrete entity».

Even more complex are the values that different human cultures ascribe to the natural world. Again, if we try to move away from the Western worldview, we realise that not only values themselves, but not even the way of articulating them, are not universally shared through cultures. «There are myriad ways to express our beliefs and our cherished values beyond the verbal medium. In many cultures, the values ascribed to ‘Mother Earth’, ecosystems or nature are expressed in non-verbal, non-descriptive forms, but rather through rituals and practices that are impossible to translate into words. This complexity results in an even higher level of incommensurability: if, to acknowledge these different sensibilities, we put them into words that are familiar to us – for example, the language of science, or that of economics – we inevitably lose part of their richness.

On the other hand, much of the Western world's 'environmental' policies are based on the attribution of a purely instrumental value to ecosystems and the biosphere in general. Put simply, nature has only been conceived as a means to human ends. Thus, it has been defined as an asset, or a resource; it has been attributed a financial value, and so on, in a strictly economic perspective.

«However, such a utilitarian perspective falls far short of our usual way of interacting with the non-human world; we have realised this discrepancy by studying what happens on the field, in the real world. When analysing reality, it is hard to claim that all the relationships we engage in are instrumental: many of our interpersonal (but also interspecies) relationships are irreducible to this». Conversely, it is not unusual for different values to overlap and intertwine in the relationship between human and non-human beings and the abiotic world: «The intrinsic, instrumental and relational dimensions of nature’s value are closely intertwined. Our aim, in working with underrepresented cultures, practices and traditions, is to show how this plurality is completely incommensurable with the utilitarian perspective of mainstream economics: indeed, there is no way to reduce this diversity under a unitary metric without losing a substantial part of it. Moreover, this mistranslation also carries with it a profound injustice, since those who have direct contact with nature have no way of adequately expressing, in their own languages - verbal or otherwise - the ‘carnal’ relationship they have with their own environment. Recognising the incommensurability of values also means giving dignity to the peoples who recognise themselves in those values, providing them with adequate representation, allowing their voices to be heard».

It is a number world

Reductionism and abstraction are, according to critics, among the two of the 'deadly sins' of which neoclassical economics is guilty. «Georgescu-Roegen, the founder of bio-economics and one of the pioneers of ecological economics, believed that mainstream economics had an ‘arithmomorphic’ approach to reality – that is, conceiving the world in numeric, mathematical terms, and describing it as made of discrete, separate entities», Muraca recalls.

This abstraction is therefore one of the fundamental characteristics of mainstream economics. Proof of this is the fact that the natural world, although vital to all human processes, is not even considered in economic evaluations. If the only measure is individual utility, everything that is not commensurable with it is then simply excluded, or reduced to an asset.

«Against this scenario, ecological economics brings to the heart of the discourse the complexity and value of incommensurable entities», Muraca emphasizes. «A fundamental step is the recognition of the interdependence that binds together the economy and the biological dimension. Indeed, human economy is the prosecution of biological processes, sharing with them – according to Georgescu-Roegen's view – a teleological (i.e., self-creative) nature. When we acknowledge the other inhabitants of the Earth as having this teleological tension, we inevitably have to face the tricky question of how to live together with entities that share our same nature and, perhaps, our same rights».

The philosophical reflection underlying ecological economics brings to light the urge to overcome the dichotomous view of reality typical of modern Western thinking. Incommensurability and plurality suggest how difficult it is to maintain that nature – and thus the economy, which is a subset of ecological systems – is composed of discrete and autonomous entities, as the principle of individualism dictates. «This awareness calls us to responsibility. Taking inspiration from some indigenous peoples with whom I work», Muraca says, «we could claim that what is needed is an integral responsibility, of which all members of a socio-ecological community are actors, and not just recipients. Thus, the complexity of the network of relationships that hold an ecological community together is not only recognised, but enhanced».

In the 20th century, notably since the Great Acceleration, neoclassical economics has claimed the status of a scientific discipline. «But economics was born as a social science, and still is today. It is a normative discipline, not a descriptive one: this means that its way of representing the world is not objective, but rather provides a narrative which is based on ideological postulates, leading to a ‘theory-laden’ description of reality. The notion of utility, pivotal in economic theory and considered almost a natural fact, was theorised by the philosopher Jeremy Bentham, who recognised it as a moral category. In this respect, classical utilitarianism – a position which I do not support, and which I find very problematic – is more ‘honest’ than current economic theory, in that it presents itself as normative, trying to indicate what is right and what is wrong, and not as an objective description of reality».

Admitting that mainstream economics is not a plain description of what the world is, but one of many possible ways to understand reality, as such prone to biases and errors, is a necessary first step to give voice to the plurality of alternative visions that, perhaps, can help us climb back up the slope of the precipice into which we are rapidly sliding. 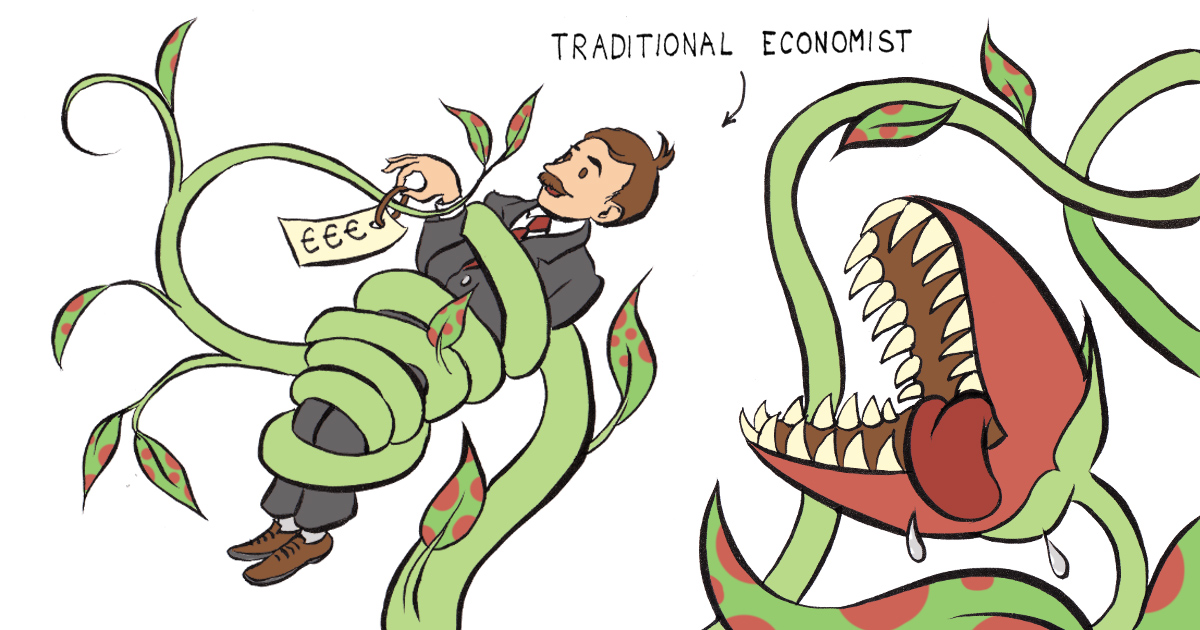