In the previous episodes of this podcast, we often talked about the inextricable link between the social and environmental dimensions – a link that is often emphasized by ecological economists, in order to make visible – as Joan Martinez Alier declared to Il Bo Live –the relations between biophysical limits and the issues of social, environmental and distributive justice.

In Spash’s view, the aim of ecological economics is both to question mainstream economics and to propose feasible alternatives. And since economy is a function of society, what we need is, first and foremost, to develop a social theory – a perspective that takes into account the power relations that permeate society, capable to analyse the actors involved and the relations between them, and that does not overlook the natural dimension.

«We need a paradigm shift: a first step might be a transformation in the way we conduct scientific research. The effort for a scientific paradigm shift should be separated from the issue of how to modify the economic structure and how to deal with the social problems associated to this change, although this separation rarely occurs.

Today we are focusing on the wrong questions, in the wrong ways, with the wrong tools. The current economic model is a paradigmatic failure; yet, challenging it is difficult, because we are completely vested in it. The interesting question, then, is: why would you maintain an unscientific paradigm that does not help you understand your object of study – i.e., society – other than that there is a close link between mainstream economics and its related power structures, and that these two dimensions reinforce each other?».

It is precisely because of these intricate interactions between different areas of the ‘social machine’ that, according to Spash, there is no straightforward solution which can be put into practice directly. «When we attempt to understand and intervene in the processes we face, it is always essential to contextualise. Different levels and contexts are characterised by very different needs, obstacles and power structures: that is why it is impossible to draw a globally shared agenda». 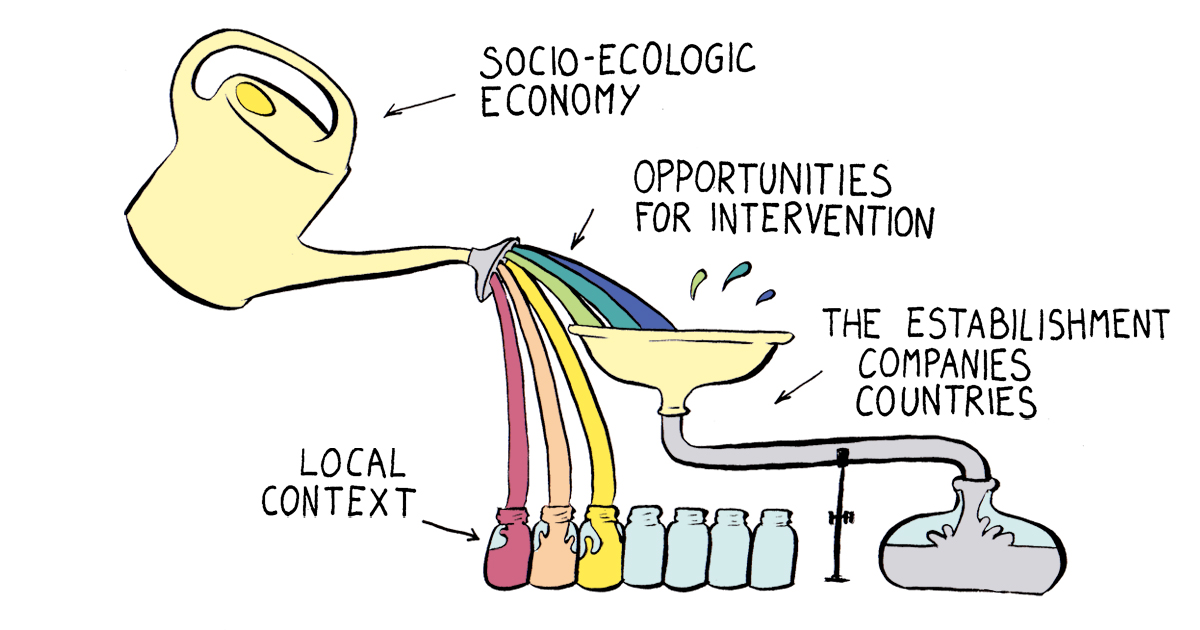 In light of these reflections, the Agenda 2030 – established with the aim of guiding all of human society onto a common path of sustainable development – is harshly judged by the professor. «Like much of what happens in the UN, [the UN Sustainable Development Goals] are contradictory, conflicting, and a compromise. They are made in a language that allows totally disparate and different countries to sign a document that is meaningless, because it does not address the reality of the situation. The goals are often mutually contradictory; moreover, they support economic growth and ‘industrialization’ while claiming to sustain ecosystems and local indigenous communities, who are exploited by the industrial society and the growth machine: it is a total contradiction. Furthermore, it is impossible for anyone to achieve all the objectives; therefore, everyone chooses the ones they prefer, implementing partial programmes that inevitably lead to limited changes».

Moreover, the very concept of Sustainable Development should be questioned. First, because the idea of social ‘development’ is a legacy of the colonialist and positivist culture which aims at univocally defining ‘progress’ by assimilating it to technological advances and economic growth. The consequence of this approach is to classify different peoples and cultures as more or less “developed” according to some arbitrarily chosen indicators (often, simply, per capita GDP). Second, sustainability is thought of as an ultimate goal, whereas it should be seen as a process that involves us on a daily basis in an attempt to balance human needs within natural limits.

A paradigm shift is therefore necessary to develop new concepts and new proposals. To the question “What can we do?”, Spash replies by stressing once more that there are no ready-made solutions that can be applied to every context, and that change must address theory and practice at the same time. «These two dimensions are not separate; indeed, it is precisely by modifying the way we act that we can also change our worldview».

«‘Solutionism’, that is, the idea that everything has a solution – the professor continues – is becoming an increasing powerful rhetoric, that implies that there are simple things that can be done, actions that can be undertaken. This is a dangerous approach, as it offers a distorted view of reality, of which it neglects the procedural nature and the inevitable complexity, which cannot be ignored when trying to understand how to act within it.

Today, in a period when the possibilities for change are visibly reduced, recognising, with a realistic approach, what are the real opportunities for action is itself a way of fighting for the necessary change. Understanding that many of the potential opportunities are kept under control in places of power, by corporations and nation states, and that they are exploited to accumulate money and resources, to manage existing technologies and to develop new ones, increasing militarization and securitization of society on a global scale, is essential to react, so as to identify and propose alternatives for change – an economy not based on markets and capital, a society based not on competition but on cooperation, a low-tech life».

Change is possible, but it requires in the first place a great imaginative effort, as we need to learn not to rely on ready-made solutions and to adopt, instead, a more nuanced perspective, that takes complexity into account.

Furthermore, efforts must be made to actualize the existing potentialities. For this reason, it is necessary to act – albeit starting from shared principles – on a local scale, coming to terms with the specific social, economic and political conditions. In a complex world such as the one in which we live, marked by non-homogeneous and often conflicting forces and processes, the actions actions undertaken cannot but avoid universalism, being instead diversified, plural, contextual.

Back to the future. Environmentalism is a social issue