The year 1972 was a milestone: exactly 50 years ago the environmental crisis was internationally acknowledged during the first UN Conference on Human Environment, held in Stockholm; after that, the socio-environmental issues were positioned at the core of the international policy agenda. Just a few weeks before that crucial meeting, the Club of Rome, an association of scientists and economists led by Aurelio Peccei, published the unforgettable report “Limits to growth” as a result of years of research. This was the first time, since the beginning of the Great Acceleration, that the concept of development, which relied completely on economic growth supported by an increasing consumption of resources and use of materials, was publicly put into question.

The Club of Rome’s Report, presented in May 1972 at the MIT in Boston, depicted an uncomfortable truth: based on a system dynamic model, they simulated the plausible global evolution following a business-as-usual scenario (i.e., on the basis of the current trends). The projections highlighted a rapid and drastic decline of resource availability, irreversible environmental degradation, and an unbearable increase of social inequality and poverty. However, those results – scientifically sound and sadly accurate – were not welcomed neither by politicians, who were afraid of losing consensus during the years of the economic expansion, nor by the academic world. Mainstream economists, deeply interwoven with the neoliberal ideology, were skeptical about the Report since the methodology and results were in plain contrast with the pillars of their discipline. The authors of the Report were labelled pessimists and too worried about the fate of the ecological systems.

Fifty years later, awareness around these issues has arisen, although the time lost so far makes it more difficult to intervene with concrete actions to reverse the unsustainable path of economic development, as indicated by the authors of the Limits to growth. In these decades, several proposals have been made, mostly from the field of Ecological Economics, but they have rarely been put into practice. We know alternatives to the current system are not only feasible and viable, but rather necessary. Among the theories on the table, ‘doughnut economics’, elaborated by the economist Kate Raworth, is one of the most comprehensive. She emphasises that human development must deal with both biophysical limits, which must not be exceeded to avoid ecological disaster, and social needs, to eradicate poverty and achieve prosperity for all. This proposal follows a holistic approach, going beyond a GDP-centred economic reductionism, that aims to balance and harmonize human demands with natural constraints.

During a TEDx talk, Kate Raworth used a catchy metaphor to explain how the current development model works: it is like a plane that has been flying for a long time and has reached a very high altitude; however, its tank is emptying and it does not know where to land. Although the situation still seems under control – the plane’s tank is very large –conditions could suddenly change, with dramatic consequences.

As Daniel O’Neill, professor of Ecological Economics at the University of Leeds and current president of the European Society for Ecological Economics (ESEE), explains, «Compared to 50 years ago, when the “Limits to growth” Report was published, we have now a more complete understanding of the elements required to achieve a truly sustainable development: the introduction of the concept of planetary boundaries has played an essential role in clarifying the deep connection between human wellbeing and the ecosystem functioning. Yet, although our knowledge has expanded substantially, we are still far from an ideal situation: of the nine planetary limits known today, six have already been exceeded, and it seems that, at this rate, the others will be too soon. One of the main contributions of doughnut economics is the identification of the inextricable links between the social and environmental crises: to remain within a ‘safe and just operating space’, environmental and social policies must be coordinated». In other words, we cannot imagine any social progress in a degraded environment or that the conservation of the environment should be placed on the shoulders of the poor.

«If we would try to reinterpret Raworth’s metaphor in light of current knowledge, we could say that we are on a plane that, despite having taken off a long time ago, still has a large kerosene tank to find an airport runway. So, we do not lack the "raw materials" to make the flight longer; indeed, the scariest thing is that we are in the middle of a vast bank of clouds behind which high mountain peaks could be hiding. We have to deal with inevitable scientific uncertainty about what could happen if, due to human activities, the deterioration of environmental conditions was unstoppable: we are likely heading towards those mountains at great speed». 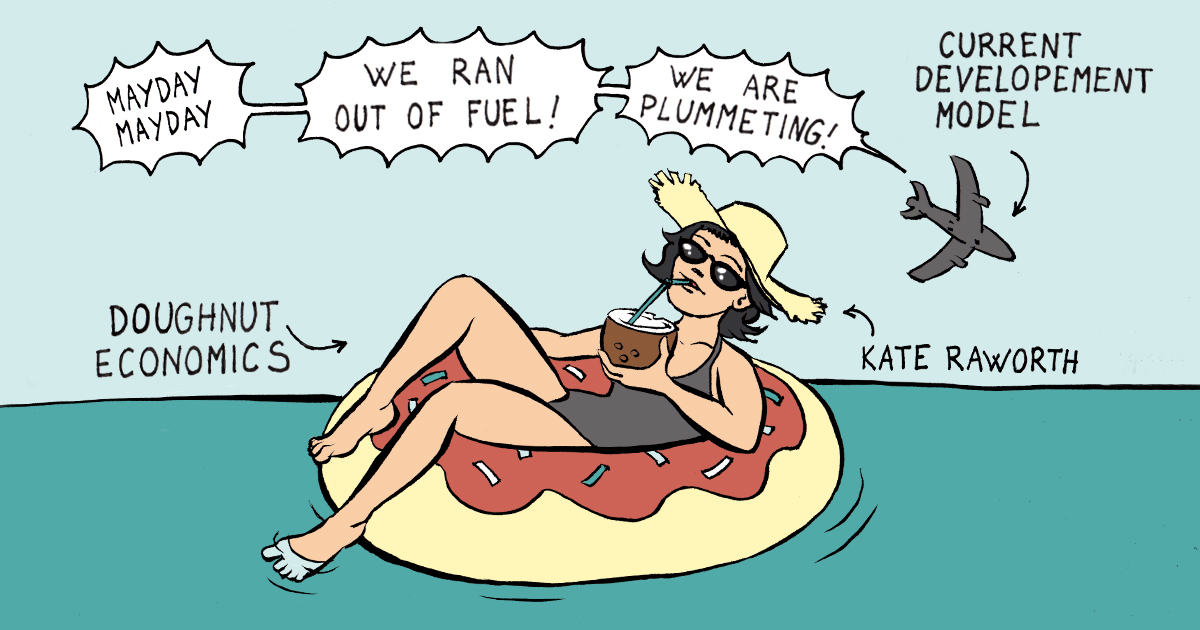 The answers from the politicians have been weak so far mostly due to a theoretical obstacle: indeed, implementing interventions towards a sustainable transition requires abandoning the old theoretical framework and embracing new ones. «I believe it is necessary – O’Neill states – to replace the objective of economic growth per se with a plurality of ends that reflects the complexity of the socio-ecological system in which we live and respects the dense network of interconnections that sustain us».

In a paper published in 2018 in Nature Sustainability, O'Neill and colleagues calculated all the indicators identified by Raworth to define the doughnut economy in over 150 countries; what they found is that no country in the world has yet been able to follow a sustainable path. «On the one hand, rich countries have, on average, higher living standards at the expense of large environmental damages; on the other hand, poor countries usually respect planetary boundaries, but this is because they cannot ensure the population satisfying levels of material wellbeing and dignity», O’Neill explains. «Moreover, we found that social and environmental indicators are connected by diminishing returns: it means that, above a given threshold, these indicators dissociate, so that, for example, once a country reaches high living standards, increasing environmental degradation will no longer guarantee an improvement in living conditions that is high enough to justify the environmental costs. This entails a good news – rich countries can degrow without substantially affect overall wellbeing – and a bad news – this hypothetical degrowth path will not be sufficient, because the supply systems are still inefficient, and to obtain appreciable results a substantial change in the way the current economic system operates would be required».

Ecological Economics, in its many forms, has the merit of clearly showing the inextricable link between the social and environmental dimensions, between the protection of natural ecosystems and human justice. «In 2021 we tried to follow up on our previous article – adds the president of ESEE – and, by applying once again the indicators provided by Raworth, we calculated the sustainability trajectories that countries might follow in the coming years, in a business-as-usual scenario. Once again, we obtained rather depressing results: the projections show that not only do all the 140 surveyed countries continue to transgress planetary limits, but they also fail to improve the living conditions of their citizens. Today, we are crossing planetary limits much faster than we are bridging the gap in the distribution of wealth. I am increasingly convinced that sustainability should not only be understood as an environmental urgency, but also as a social need. If we addressed these two dimensions with a synergistic effort, we would probably be able to build a better system».

Such complexity can be paralyzing. How can processes of such spatial and temporal scope be tackled? How is it possible to divert the intricate causal chains, full of events and actors, which are carrying us towards ecological collapse and social failure?

«It is precisely in the face of such complexity that politics comes into play, alongside individuals», says O’Neill. «When I started working on these issues, I believed that by demonstrating that the economy can work even without growth, from a technical point of view, everything would go well. I had a naively optimistic vision, which did not take into account a fundamental factor: in economic issues political interests are always at stake. This is why I believe institutions must be the main actors of change, for example by promoting initiatives that limit the power of entities such as large multinational corporations, which in the past decades have done all they could – think of the disinformation campaigns regarding the effects of tobacco on health or fossil fuels on the environment – to hinder the implementation of positive changes for society.

Some degrowth thinkers go even further, arguing that the longed-for change will take place only if, with courage, we decide to abandon the capitalist model. Over the years, observing the way in which economy and politics intertwine, I am increasingly convinced this is the right way». In fact, highlighting the objective limitations of growth delegitimizes the theoretical and moral premise of the system in which we live. And, since some form of degrowth – understood as a necessary contraction of the economic system, due to planetary limits being reached – will be inevitable, it is essential to spread, as far as possible and at all levels, from individual citizens to institutions, ideas and proposals that limit the conflicts that inevitably arise in phases of transition. This effort is all the more urgent the wider and deeper the change we have to face. What awaits us is an epochal transformation.