Walking around cities, many of us have probably come across people roaming around picking up waste and taking it with them. It is a less unusual activity than one might believe, and widespread almost everywhere the world. For some it is their main job, and for those who practise this activity it is usually the only source of livelihood. It is called ‘waste picking’, and in most cases it remains part of the so-called informal economy, that is, not legally recognized.

Waste picking is basically selecting recyclable materials within the huge amount of waste produced daily in the urban environment, picking them up, segregating them by type and reselling them to dealers, who take care of the actual recycling of the objects. A job that is in all respects similar – at least, at first glance – to that of companies that, on behalf of the municipalities, manage and dispose waste. There is, however, one main difference: only the latter activity is legally recognized, while the informal one of waste pickers is not.

As Federico Demaria, professor of ecological economics and political ecology at the Autonomous University of Barcelona, explains, «the fact that these people work in a completely informal context means that they have no protection, neither from a health nor a legal and economic point of view». Almost everywhere, the most marginalized communities are the ones to undertake such a degrading job: «In India, for instance, waste pickers are members of the castes at the base of the social pyramid (the pariah); in several countries, this work is done by members of indigenous peoples who move from the countryside to cities; in other cases, it is up to ethnic or religious minorities – as is the case in Egypt, where this activity is reserved for Copts, a Christian religious minority».

«We don't know exactly – Demaria continues – how many waste pickers currently exist. According to an estimate of the World Bank, they are about 1% of the global urban population: a number that, according to the International Labor Organization, would correspond to about 20-25 million people worldwide».

But what is more striking is that very little is known about this large population: the reason for this is their invisibility, their being forced to live on the margins of society, surviving thanks to what others have already used and discarded. It is local institutions, in the first place, that are in charge of waste management: that is why it is up to them to deal (or not) with waste pickers. But the approaches to this issue are not always adequate, as Demaria outlines: «The World Bank again provides a description of the most common attitudes of local institutions towards these people: sometimes, they simply disregard their existence; in other cases, they actively persecute them; on some occasions, however, policies are put in place to support their formal integration within the local economy. In some areas, especially in Latin America, waste pickers have managed to politically organise, by setting up associations or trade unions, in order to fight for their rights and obtaining, in some cases, major improvements».

The existence of waste pickers is emblematic of the contradictions that characterize our socio-economic system. « Today, there is a lot of talk about circular economy: we are finally understanding that the linear economic model of industrialized countries is unsustainable from an environmental point of view. Yet, the social and political dimension of this economic configuration are still completely overlooked – and the very existence of waste pickers is a glaring example of this.

They are millions of people who actually carry out a ‘green’ job – as they clearly follow the principles of the circular economy – and, despite this, are totally ignored. Instead, paying due importance to their activity and, moreover, improving their working and living conditions would be reasonable: in fact, providing them with the opportunity to work in better conditions would not only mean addressing a social issue which involves tens of millions of people and their families, but it could also increase the environmental benefits that this informal activity guarantees to the whole society».

Addressing the issue of waste pickers by adopting the ecological economics perspective allows us to focus on two major issues – the social and the environmental ones. «In this case, these two objectives are clearly intertwined: recognising the social value of this job would give waste pickers greater credit, and thus pave the way for an improvement in their living conditions. I am not doing an apology of this kind of job», Demaria clarifies. «It is the waste pickers themselves who recognise the lack of dignity that this activity entails: for example, they do everything to ensure that their children are not forced to undertake such job. Yet, until the society is unable to offer them a viable alternative, the best choice is trying to improve the source of livelihood they already have, taking action to open up more opportunities to these people». 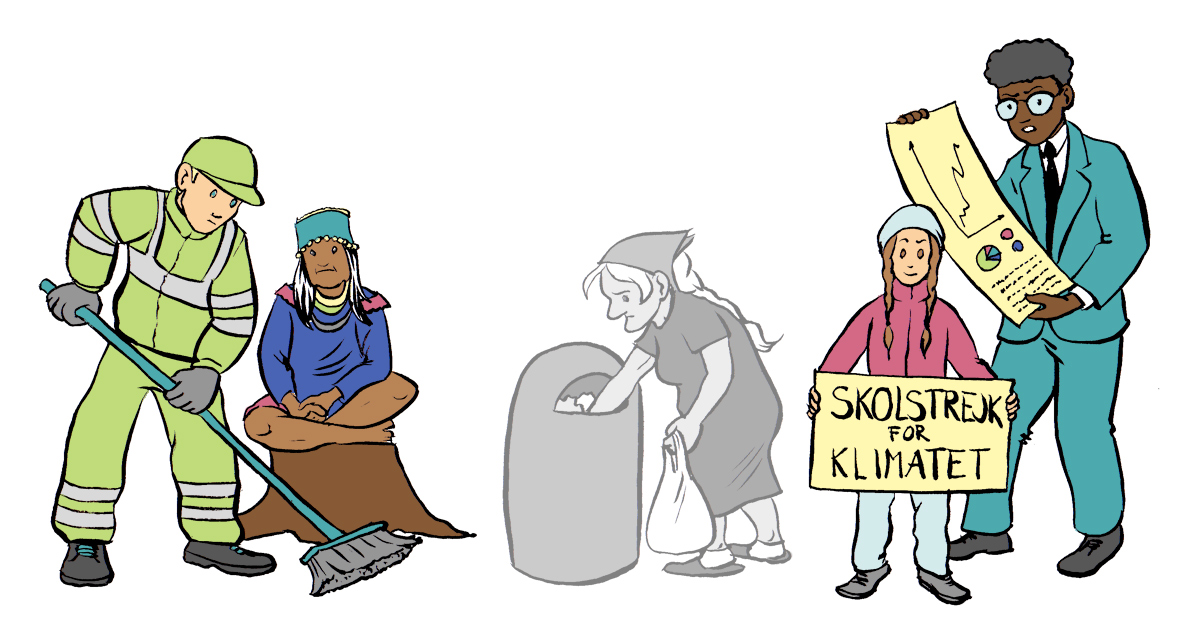 One of the possible ways to do this by recognizing the contribution carried out by waste pickers at the local level and providing them with a labor contract and fair financial compensation, which could be calculated estimating the environmental benefits that their recycling activities ensure to the whole community. «By applying the tools of ecological economics, we can evaluate the impact of their work not only in monetary terms, but also in terms of matter and energy flows.

The idea that should guide such an approach is, on the one hand, a genuine assumption of responsibility, on the part of society as a whole, for the waste it generates, and on the other hand acknowledgement of the importance of the work carried out by those involved in managing and disposing – formally or otherwise – of this waste».

Collaborating with the Environmental Justice Atlas, I have documented more than 70 conflicts in the world involving waste pickers in the global South: we are witnessing, in real time, their conditions getting worse. I think this occurs, at least in part, because local institutions are often under pressure from waste management corporations that do not make any profit from recycling, and therefore try to discourage its implementation».

So far, we have focused on the so-called ‘global South’; but we have to keep in mind that waste pickers are widely present – albeit, perhaps, even more invisible – also in the so-called ‘global North’. «The existence of such occupations is closely linked to the presence of inequalities within society. Even in industrialized regions, such as Europe, this activity is ‘reserved’ for communities living on the margins of society, such as the gypsy community. In some cases, we could even hypothesise a form of environmental racism towards this and other minority communities».

Though recognising the historical roots of this phenomenon, Demaria believes it is essential that we focus primarily on the present: «We have seen a marked increase in waste pickers in the global North after the severe financial crisis of 2008. As we are now entering a new economic recession, it is reasonable to expect that people involved in informal practices will increase again. I believe that informal recycling is part of the future: rising prices and the reduced availability of natural resources, combined with an increase in inequalities, are the perfect recipe for for more and more people entering the world of informal recycling», with all the related consequences in social, economic and health terms.

There is a solution, albeit partial, to reduce the sacrifices these people have to undergo in order to survive, and it lies primarily in the recognition of their existence and social role. Bringing them into the ‘formal’ economy, providing them with a labor contract and decent working and living conditions, should be universally adopted measures. In some places – especially, once again, in Latin America –waste pickers have managed to obtain similar concessions, receiving in some cases adequate working tools, means of transport, places for storing the collected waste. Of course, it is not enough, but it is a first step towards giving dignity to a social position that, if completely ignored, is experienced as unnecessarily humiliating. Once again, ecological economics offers a paradigmatic framework capable of addressing the issues of our time by not considering only their economic and monetary dimensions, but by problematising them and turning them into political issues.