Linear, reversible, predictable phenomena – this is what the world is made of, according to the capitalism theory, the economic paradigm that defines our era. According to this perspective, the economic sphere is an autonomous and self-sufficient system whose primary objective is infinite growth. The goal is to satisfy the ever-growing needs and desires of Homo oeconomicus, and the means is a cyclical succession of production and consumption.

Neoclassical economists view reality through the lens of a highly reductionist epistemological model, which describes the world as a simple system consisting of a limited set of variables. This filter, however, overlooks the irreducible complexity of reality. For instance, neoclassical models fail to recognise the fact that human economy is but a subsystem of a much more wide and elaborate system – the biosphere.

Considering this higher level, the narrative defended by mainstream economics is clearly insufficient to describe and guide the real world, where evolutionary trajectories, thermodynamic laws, and irreversible processes are at work.

Romanian mathematician and economist Nicholas Georgescu-Roegen (1906-1994) was among the first scholars to address the theoretical fallacy of neoclassical economics. Today, he is considered one of the founders of bioeconomics and pioneer of ecological economics.

The first episode of this series, that explore the history of ecological economics to shed light on the social and ecological challenges of our future, starts with Georgescu-Roegen’s seminal contribution, under the guidance of one of his youngest students: Kozo Mayumi, professor at the Kyoto College of Graduate Studies for Informatics.

Understanding Complexity: Entropy and the Arrow of Time

Georgescu-Roegen’s critique of neoclassical theory builds upon a theoretical revolution in economics. In fact, contrary to most economic theory, the scientific reference point of his ‘bioeconomics’ is not Newtonian theory, which describes reality in mechanistic and a-temporal terms, but rather the theory of biological evolution and the three laws of thermodynamics. Including biological and physical laws in economics is a turning point in understanding how the economy works, as it must comply with those laws. The second law of thermodynamics, for example, states that in a closed system, entropy increases steadily because energy is bound to a qualitative degradation; therefore, a reversible economic process – one of the main assumption of neoclassical theory – cannot exist.

But Georgescu-Roegen goes further, developing a fourth law of thermodynamics. According to his view, the steady tendency to entropy increase affects not only energy, but also matter. And, in fact, every human activity needs to extract low entropy resources from the environment and dumps high entropy resources at the end of the production cycle. Since, in terms of matter, the biosphere (of which the human economy is only a part) is a closed system, the application of this fourth thermodynamic law imposes an upper limit on economic growth; this limit is determined by the depletion of resources and the saturation of the environment’s capacity to bear increasing loads of waste and emissions.

This evidence, of primary importance for the current conformation of the economic process, completely focused on the production of goods, has been systematically ignored by ‘orthodox’ theorists. Instead, society has behaved as if resources were infinite and the waste products of human activities left no trace in the environment. Similarly, neoclassical economics disregards the importance of the second law of thermodynamics in understanding the functioning of the economic system, its irreversibility, its non-perpetuity.

«Neoclassical economics applies a high discount rate to the wellbeing of future generations. Ecological economics, on the other hand, incorporates the increasing cost  of the depletion of natural resources», thus recognising future generations’ right to receive compensation for the burden of a more polluted and impoverished world. 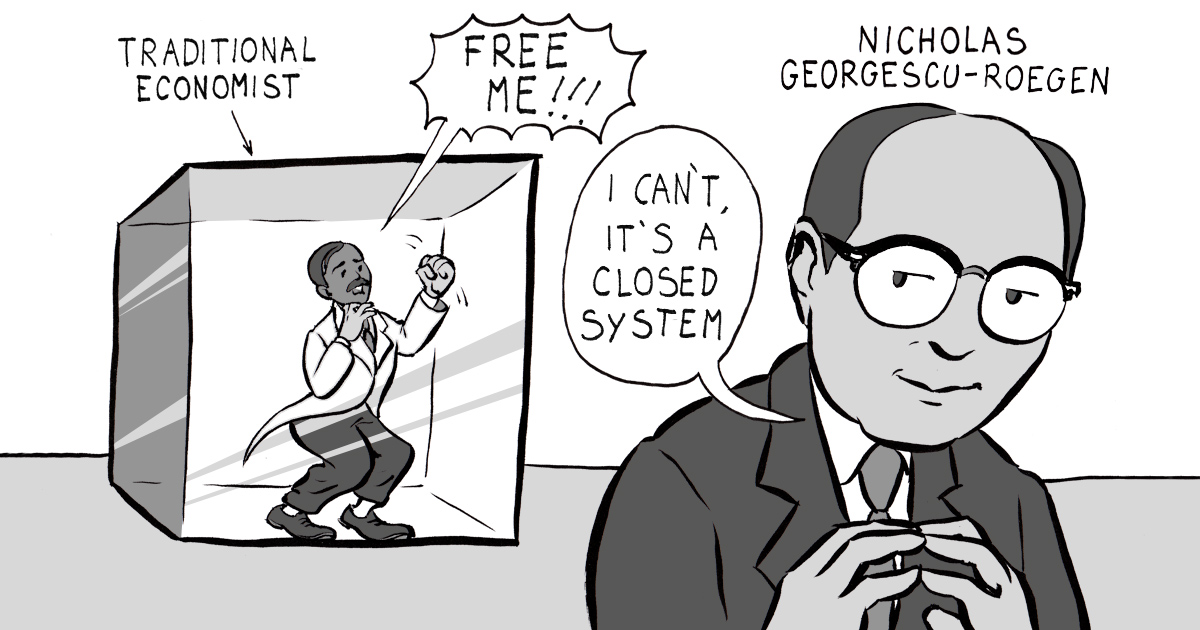 For ecological economics, on the contrary, economic process is irreversible, as it is part of a historical path that cannot be altered retroactively. Future outcomes of the economic process are not predictable; finally, establishing a circular economy is not impossible for material circulation, but it is impossible for energy, because once dissipated in the environment it cannot be recovered, as the second law of thermodynamics shows».

A major innovation introduced by ecological economics is the concept of incommensurability. The reductionist view of conventional economics applies to all aspects of reality: every process and product is assigned a monetary value, which is the only important proxy for determining the overall value of any entity. This approach underlies questionable economistic solutions to the current environmental crisis, such as emission trading and other environmental taxation measures.

Ecological economics challenges this reductionist approach, emphasising that one cannot reduce everything to its economic value: some dimensions – e.g. economic, social and environmental – have values that are incommensurable with each other.

«This has profound political implications», Mayumi points out. «And, in my opinion, this is Georgescu-Roegen’s main theoretical contribution not only to ecological economics, but to economic thinking in general».

This paradigm shift entails that all decisions, not only at the political level, must be supported by a comprehensive public debate, in order to accommodate a plurality of demands. It is now clear, in fact, that there is no single ‘technological’ solution to efficiently solve the ecological and social issues raised by the ongoing climate crisis and growing inequalities.