We humans do not live in isolation, we are embedded in the environment; we are not autonomous, but dependent on the resources and services that nature provides. This inextricable link makes it impossible to draw a clear distinction between ‘human’ and ‘non-human’, between social and environmental: these dimensions are constantly interacting and influencing each other.

Becoming aware of this connection means acknowledging that the interdependence between the environmental and the social spheres, inevitably bound to each other within a single 'metabolism'. This consists of the continuous exchange of matter and energy and the transformation of these resources into services aimed (in theory, at least) at increasing collective wellbeing, and then returning them to the environment as waste.

However, whenever the exploitation and distribution of resources among human beings is unequal, we are faced with social injustice. This is precisely what happens in the current structure of the global economy, in which an ecologically unequal exchange takes place. This concept describes the existing imbalance between rich and poor countries both in their access to and distribution of resources, and in the burden of environmental degradation suffered by the latter, which is largely caused by the activities necessary to maintain a level of prosperity reserved for a small part of the world’s population.

This is neither a purely economic nor just an environmental issue, but rather a problem related to the unequal distribution of power in today's global society - it is, therefore, a political issue. Political ecology, a discipline founded between the 70s and the 80s of the last century, is concerned with these relationships, often not very visible, between economics, ecology, and power, by observing their intersection with environmental changes (whether natural or anthropogenic).

« One of the most influential books during those early years of theory-making in the discipline was "Land Degradation and Society", by Piers Blaikie and Harold Bookfield. By applying the framework of political ecology, the authors – geographers by training – addressed the issue of why land management so often fails to prevent problems such as erosion, degradation, salinisation. Their answer was crucial: recognizing the plurality of elements – social, economic, ecological, political – that contribute to the emergence of a phenomenon such as the degradation of an environment was necessary, as was not neglecting the complex interactions between these elements. Since then, research in this field has expanded visibly. From my point of view, political ecology can be defined as a discipline that studies environmental conflicts over natural resources».

These are the words of Joan Martinez-Alier, an eminent representative of the ecological economics and political ecology communities. Martinez-Alier, emeritus professor at the Universitat Autonoma de Barcelona, was awarded the Balzan prize in 2020 for having provided «a fundamental contribution to the foundation of ecological economics as an interdisciplinary field of study dedicated to the standardization of economic activity in a way that promotes human well-being, sustainability and justice».

«The connection between ecological politics and ecological economics is clear», continues Martinez-Alier, «and can be traced back to the analysis of social metabolism. Of all the energy and materials we consume, the majority is lost after the first use; energy, as the second law of thermodynamics dictates, is irreversibly dissipated; materials, on the other hand, are only recycled to a very small extent, due to high monetary and energy costs. Population growth and the consequent increase in human needs are causing a rapid expansion of social metabolism; every time we discover new “commodity frontiers”, social metabolism expands a little further. But this comes at a very high environmental cost, which, concealed from the eyes of rich countries, is heavily paid by the populations of poor countries, and especially by those who have no power, who are unable to make their voices heard. Hence, environmental conflicts arise. Local populations, indigenous people, those who depend directly on the environment – these groups struggle, often desperately, for their survival, their culture, their identity».

According to the Environmental Justice Atlas, a massive open access database founded and managed by Martinez-Alier and his collaborators, 3692 cases of environmental conflict have been reported worldwide: «At least 40% of these involve indigenous peoples, who, despite living in close contact with the ecosystems that host them, are denied their right to manage the lands of their ancestors, to which they are bound by a strong sense of belonging», explains Martinez-Alier. 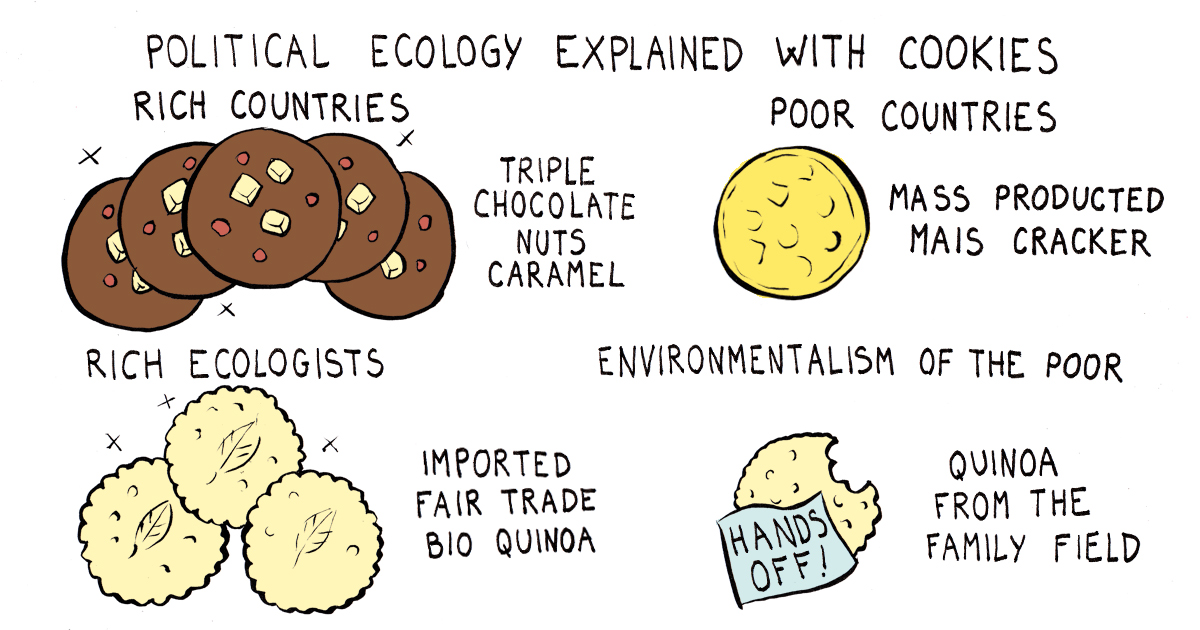 «By studying this kinds of conflicts, I have experienced how real and tangible the concept of incommensurability of values is. In every conflict over environment and resources, completely different values are at stake: a territory, an ecosystem, a single natural element may contain ecological, aesthetic, cultural, moral, even religious values for some, and utilitarian values, often expressed in monetary terms, for others. These two approaches are often irretrievably distant, and cannot be harmonized. Moreover, this contrast not only occurs on a local scale, but also on a global level: how to reconcille, for example, the pursuit of continuous economic growth with the damage caused by the imposition of climate change? Based on which values should we choose whether to prioritize – as was the case during the pandemic –economy or health?».

While some still look at environmentalism as a pastime for the rich and bored, political ecology strongly demonstrates how environmentalism first and foremost encompasses social and political demands. «This is what the so-called environmentalism of the poor makes clear: the new frontiers of extraction and exploitation of resources and raw materials increasingly intersect with local communities and indigenous peoples».

This brings such communities to embrace 'environmentalist' and nature conservation arguments not on the basis of ideology, but out of necessity.. The construction of a mine, a dam, a large industrial plant, or an intensive plantation is a threat not only to local biodiversity, but also to the very survival of those communities which, although poor in economic terms, are able to subsist on a healthy ecosystem. Faced with such threats, local farmers and breeders become activists: what they are defending, along with the natural world around them, is their identity, their people, their very future.

The claims of these 'poor environmentalists' – mainly (although not exclusively) active in the so-called 'global South' – are social issues in the first place. Indeed, it is intuitively evident that there cannot be any distinction between social demands and environmental protection, especially where the uncontrolled exploitation of resources causes both destruction of the environment and denial of the rights of entire communities. These struggles prove at least two points: first, the theoretical claims carried out by ecological economics have great practical value, as they translate into precise political choices; second, justice (both environmental and social) is linked to power, and collective action is required to obtain it. Thus, active citizens and not consumers will carry out a conscious transition that reconciles human needs with those of other life forms within biophysical limits.