Fifty years ago, the problems we are facing nowadays and the related risks for the future were already well known; an international roadmap on how to deal with them was needed. Half a century has passed, and we are almost at the same point. The same risks are on the table – indeed, they have become real – supported by increasing scientific evidence, along with countless possible solutions, both technical and political.

What is still missing, in order to tackle the present socio-climatic-environmental crisis, is political will. We are aware of what we are going to face, yet we still find ourselves witnessing, helplessly, this guilty and agreed inaction.

Yet much has changed since 1972 (the year of the first conference on environment and development, sponsored by the United Nations), and the improvements are more than evident: the climate crisis has become a 'cover' topic; environmental protection and future generations’ rights have become a legislative matter, being formally recognized by several Constitutional charts; all UN member countries are committed – in words, at least – to follow a path of sustainable development.

The first question we asked to Katharine Farrell, our guest for the eighth episode of Back to the future, is a prospect question: once we are aware of the problems, it is perhaps time to focus on the future, on what can be done, how we should behave and act.

«Before we talk about the positive aspects, it is important to focus on how much is still going wrong», Kate Farrell, professor at the Universidad del Rosario, in Colombia, states. «Having said that, talking about what is going well is essential: for example, it is important to recognize the essential role organizations such as the IPCC or the IPBES have played in raising attention to these issues, moving them beyond the boundaries of the scientific community and making them political issues. On the other hand, it is now clear how deeply intertwined science and politics are: as the German philosopher Jürgen Habermas argues in his latest works, we humans do not act based on a neutral understanding of reality, but on the basis of our interpretation of what is happening around us». This is why we have to pay great attention to narratives: although they do not directly shape reality, they can modify the way in which we humans live, altering it through our choices and actions.

Moreover, as Kahneman and Tversky showed in their well-know book “Thinking, Fast and Slow”, we humans are not machines which can always make the optimal choice, on the basis of all the available information. Rather, our mind is the result of biological evolutionary processes that underly our biases and limitations, of which we are often unaware. Indeed, there is a compelling drama going on in our minds, a filmlike plot between two main characters; these two characters are the impulsive, automatic, intuitive “System 1”, and the thoughtful, deliberate, calculating “System 2”. As they play off against each other, their interactions determine how we think, make judgments and decisions, and act.

«According to the philosopher of science Daniel Dennett, consciousness is an emergent property, which comes into being when, being confronted with reality, we initiate a process of deliberate reduction of complexity», Farrell explains. «In brief, the outside world the world is sending into me more signals, or a greater diversity of signals, than I have modes to ‘elaborate’. In the face of this difficulty, the human mind tends to adopt two strategies: either it groups these signals in an inefficient way, or it drops some of them, with the risk of losing relevant information. The point is that using our mind to try to make sense of how itself works, may prove not to be a successful strategy: in short, we may find ourselves trapped within our own biases.

However, once we become aware of these boundaries, we can still make interesting discoveries. Another scholar, the biologist Mary Clarke, points out that our species has evolved into social structures composed of small groups of individuals: our ability to recognize the other as moral subject and to feel empathy towards her is intimately bound up with our ability to feel like we directly know that person.

And since being able to feel empathy and to recognize the other as a moral entity are essential features, in my opinion, to act responsibly in the political dimension, we should perhaps try to design a social structure more centered on federalism, i.e., on a network of little communities where it is easier to ‘elaborate’ the signals and, therefore, to act responsibly».

Nevertheless, the crisis we are experiencing – first of all, the climate disaster that is unfolding before our eyes – has global implications which do not respect the cognitive limits we have inherited from our evolutionary history, nor do they care about whether all those species that will likely become extinct during the current biological crisis were ever considered moral entities by us humans. It looks like an insurmountable impasse.

«I strongly believe – argues Farrell – humans are able to empathise only with other human beings: I would never be able, for example, to put myself in the shoes of a lion. My moral relationship with a living being who is so different from me is necessarily different from the relationship I have with another human being; and this is because I can't even imagine what it means to be a lion. Furthermore, common ethical values imply shared norms: but what norms could I ever share with an apex predator which, following its own norms, would devour me if it had the opportunity?

This does not prevent me, as a moral being, from owing duties also to those who are different from me: I can have duties and responsibilities towards others that are not exclusively based on having that shared moral normative contact. I have the duty not to inflict unreasonable harm, not to violate integrity, a duty to care. These rules can be applied to a much wider 'moral circle' than one's own narrow community, and mark a clear separation from the conventional European masculinist ethics, which would like to impose the same rules on everyone». 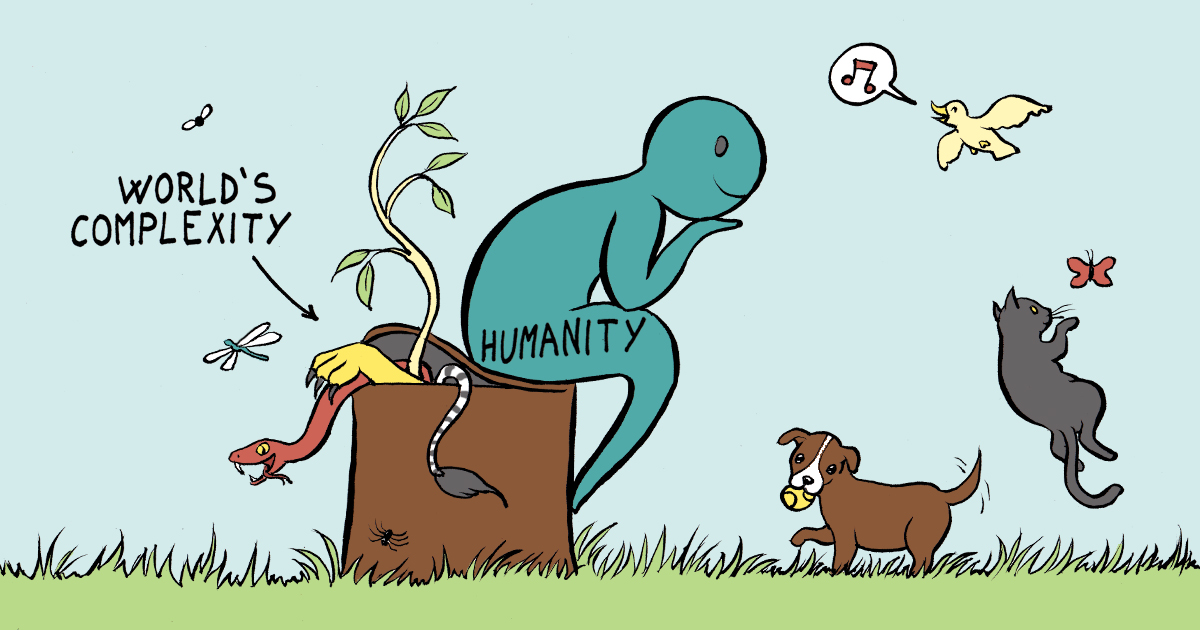 What we need, and must strive for, is to recognize the complex modularity that characterises our socioeconomic reality. «The Western ‘industrialist’ model of scientific knowledge production, for instance, is not a natural necessity, but rather the product of a specific cultural vision: recognizing this evidence allows us to look more impartially at the influence this form of knowledge exerts on our way of interpreting and relating to reality», explains the professor.

Yet, despite being dominant today, this is not the only possible way to engage with reality: «Only recently have we been rediscovering the immense culture of indigenous peoples, who have passed on for millennia a body of knowledge that is both comparable and compatible with modern Western science».

Not ignoring this plurality allows for a more comprehensive perspective, that recognizes the links between the scientific construction of the world and the political determinants of that approach to reality. «Industrial capitalism is a perfect example of this. Here technology and politics, science and government have merged: in modern European society there is a clear link between the production of scientific knowledge and the material exploitation of resources. Despite how we value it, we have to acknowledge the existence of this historical process».

«But this is only the first step», Farrell warns. Once acquired, in fact, this knowledge imposes a moral duty: once we understand the scope of these dynamics, can we really agree not to do something to change them? «Hence, we need to embrace a new point of view: acknowledging that there are many other ways to create knowledge, and many other ways to classify and categorize reality and its components. This is about adopting a ‘fuzzier’ perspective, adopting blurred boundaries: it seems odd, but I think it can be an excellent starting point».

A starting point that allows us to challenge the very structures – cultural, cognitive, social, political – that we have accepted as ‘normal’ until now. In reality, they are to some extent power structures, the assertion of which has silenced all the existing alternatives, which suddenly became minorities, denied equal dignity. The aforementioned masculinist ethics does not only imply – as the name itself would suggest – a devaluation of the feminine with respect to its male counterpart; the epistemological operation consists in creating dichotomies in which there is always a ‘winning’ and a ‘losing’ side. It can be modern science against traditional knowledge, man against woman, human being against nature: the mechanism implemented is always the same.

The complexity of the world, where everything is interconnected, cannot be reduced to the economic dimension alone, and levelled at the simplified vision that sees profit as the sole motivation. Moreover, as Gramsci taught, theory and praxis are inseparable; rather, everyone's active engagement is needed both to understand the world and to change it in a conscious and shared way. What can be done, then, to undermine the economic and cultural hegemony in which we are immersed? According to Farrell, the road is well laid: working proactively to ensure that dichotomies are smoothed out, and spreading a worldview that is based not on dualisms, but on equality; not on homologation, but on plurality.