Today, ecological economics is a well-established economic approach and academic discipline, with theoretical cornerstones, founding textbooks, leading representatives. This institutionalisation, which has been slow to take place and has long faced opposition from mainstream economic circles, is the latest step in a journey that reaches back a long way, starting, in essence, from a realisation.

Ecological economics is indeed just one of the many names to which groups of people have gradually come together under the realisation that the capitalist economic system, adopted by modern societies, is doomed to ruinous failure and that, unless a change in the current trajectory is made as soon as possible, humanity may find itself sharing a similar fate.

The merit of ecological economics is that, from its earliest formulations, it exposed the contradiction inherent in a system which, while promising development and prosperity, has instead eroded with astonishing speed the resources on which our societies are founded.

One of the main representatives of ecological economics, and one of the founders and first President of the International Society of Ecological Economics (ISEE), is Robert Costanza, professor at the Institute for Global Prosperity at UCL (University College London), who has worked hard to expose the risks inherent in the capitalist and neoliberal economic-political model.

Alternatives exist – and we have already explored many of them within this podcast, Back to the Future. Decoupling human flourishing from economic growth 'at all costs' is not just an unattainable utopia, as Costanza reminds us: «I think we can take the example of all biological organisms, who grow for a while, then they stop growing and continue to develop and improve – so I think it’s not anything unusual or unnatural this transition from growth to a steady state, to development. The problem is if we do not recognize that this is the path we need to be on.

The main goal of economics should be to improve, enhance, and sustain both human well-being and the well-being of the rest of nature, and recognize that we are all part of the same interconnected system. This is the major difference I see between ecological economics and conventional economics – even environmental economics: I believe they’re beginning to see that connection, although conventional economics has thought of the economy as an isolated thing, not really connected to the rest of nature. And, more in general, our societal worldview that there’s humans over here and there’s nature over there is not conducive to the idea of achieving a sustainable well-being. So, we need to change our fundamental worldview as well, and this is what ecological economics is trying to do».

Albeit slowly, probably more slowly than is necessary, this approach is gaining momentum. Although not everyone traces this change of vision back to ecological economics - there are numerous disciplines and movements operating in this vein, from welfare economics to doughnut economics -, the principles driving this shift are widely shared, according to Costanza. «There are several movements that are quite significant and overlap with ecological economics: wellbeing economics, doughnut economics, steady-state economics. These all share similarities, and are making an effort to bring all those elements together. There is also a group called the Wellbeing Economy Alliance, which recognizes that we are all talking about the same things, and if we really want to make progress, we have to not differentiate ourselves from each other, but to really build a strong alliance and a movement going forward. There is even an adjacent group called the Wellbeing Economy Governance – which includes Scotland, Finland, New Zealand, Wales, Iceland and Canada – that groups vanguard governments which are promoting policies to improve the collective well-being beyond economics growth». 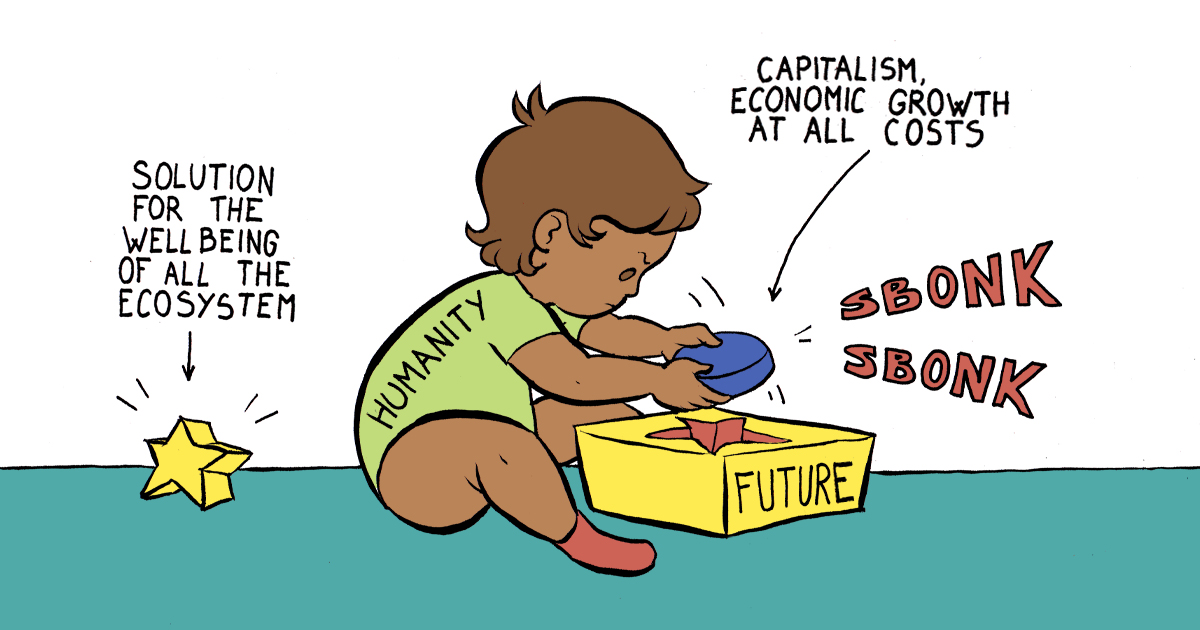 After all, translating these theories into practice is the only step that is still missing: «It is not that we do not know how to solve these problems. The solutions are out there. The question is: why are we not making faster progress? One way of thinking about it is that we are in fact addicted to the current system. There are all these positive feedback loops that keep us stuck in the current way of doing things». And, like any addiction, simply pointing out the existing problems to the addict is not really enough to change behavior – in fact, it can often be counterproductive. However, we need to cure our addiction, as the professor explains.

«Then, the question is – what the therapy do we need in order to overcome this addiction?». Costanza addressed this issue in a volume, in which – he says –  he tried to use the therapies used to treat addictions on an individual level as a model. «It turns out that there is a therapy called motivational interviewing which is quite effective at the individual scale. It does not confront the addicts with their problems; instead, it engages them in a discussion on their life goals, taking them out of the present problems and asking, ‘what do you want to achieve with your life?’. Only then, once they have established that, it uses that to motivate the difficult changes that are necessary to get there.

The analogy at the societal scale is how do we build a shared vision of our life goals – of what a sustainable and desirable future could look like for humanity on the planet Earth? That is, in essence, the missing step we need for the therapy to be effective».

If this is the goal, where are we at?

«I think we have acknowledged that we are addicted to the current paradigm of growth ‘at all costs’, and that such vision is leading us over the edge of a cliff. But I think there is some hope in that regard as well, because people, once presented with alternatives, seem to favor the kind of world we are talking about. First of all, we have to build and spread among society a common vision of the shared goals, and then we will have to adapt, change, and modify the pathway to realise that vision given the conditions».

However, this is a slow process. Do we have time to implement this democratic and shared vision?

«I think – the professor claims – that’s how societies have changed historically. Let us consider Martin Luther King’s famous quote, ‘I have a dream’. It was that dream that pushed the agenda of the civil rights movement remarkably quickly, given how long it took to get there. So, I think these things happen as tipping points – it seems nothing’s happening, and then all of sudden things change really quickly. So, the worst thing we can do is to give up and say there is no hope, things will never change. The only way things will change is if we want it to change, and we continue to work on that».

We are experiencing a ‘perfect storm’ – economic and energy crises, pandemic, war, inflation, and climate change – and usually big crises provoke social fractures. Also, we live in times of very concentrated power, mostly in terms of economic power. So, how can we overcome these vested interests, and try to make the distribution of power less uneven?

«Crises can also be opportunities – in fact, you need a bit of a crisis to shake up the system in order to allow for the kind of transformations that we are talking about. One way to overcome vested interests could be cutting all the public subsidies that fuel growth. Other techniques could also be implemented, but I think it is still going to take a movement and a common vision to begin to implement this kind of policies, in opposition to the groups that keep us stuck in the path we are following».