After years of tentative efforts, the world has adopted, as one of the instruments to try to implement the transition to a sustainable way of life, the 2030 Agenda, signed in 2015 in Paris and embraced by all 193 member states of the United Nations.

The Agenda consists of seventeen goals, very diverse in their aims and spheres of action, but equally important for achieving, at local, regional and global level, a transformational change based on the three pillars of sustainability, which encompass the social, economic and environmental dimensions.

Underlying the 2030 Agenda is the concept of sustainable development, the most famous definition of which was outlined in 1987 in the landmark book Our Common Future, which was the first report of the World Commission on Environment and Development, established in 1983 and chaired by the former Prime Minister of Norway, Gro Harlem Brundtland.

The Sustainable Development Goals (SDGs) have been greeted with general approval, and are - in the view of many - an important tool for bringing about the necessary transformation. However, many of the targets (the sub-goals which compose each of the 17 Goals) to be achieved by 2020 have not been met, and many countries are struggling to keep up with the pace prescribed by the Common Agenda. Besides the concerns related to the effective feasibility of this ambitious roadmap, critical voices have been raised since the very beginning against the theoretical framework of the document, which is – according to some views – too closely linked to the traditional concepts of neoclassical economics, and as such not innovative enough. In fact, even among those economic theories that stand as a critical alternative to the current dominant approach, there are several degrees of radicality. The concept of sustainable development stands, among these, in a sphere that we could define as one of ‘moderate reformism’.

As Valeria Andreoni, an ecological economist and lecturer at the University of Liverpool, points out, «The United Nations Sustainable Development Goals have attracted many criticisms stressing their promoting a notion of development that does not entirely fit with the paradigm of ecological economics. We should not forget, however, that the 2030 Agenda has a predecessor, the Millennium Development Goals», which were supposed to achieve, between 2000 (the year of ratification) and 2015, hunger eradication, environmental sustainability, and the realisation of a true global partnership. «Compared to the many shortcomings of the Millennium Development Goals, the Goals defined for 2030 represent a clear step forward».

«One of the major advances contained in the Sustainable Development Goals is also consistent with the theoretical framework of ecological economics. It is the recognition of complexity: whenever a sustainability policy is implemented, the potential cascading effects, positive or negative, that such a decision might generate should be taken into account. The theoretical underpinning of this recommendation is the full understanding of the interconnection between the different dimensions of sustainability.

On the other hand, there is still a long way to go when it comes to the acceptance of another pivotal concept of ecological economics, the concept of “strong” sustainability: the SDGs, in fact, still tolerate a “weak” interpretation of sustainability, according to which everything can be reduced to an economic measure, and thus equated by assigning a market value. In a way, this compromise is necessary: evaluating the different aspects of sustainability is crucial for implementing such policies, and the incommensurability that actually exists between different dimensions could prove to be an obstacle to action».

“ Sustainable development is the development that meets the needs of the present without compromising the ability of future generations to meet their own needs Our Common Future, WCED 1987

In fact, it is precisely in the implementation dimension that the Sustainable Development Goals have revealed their greatest shortcomings. Their universality, in fact, makes their application to local contexts difficult, as they present different needs. «Once again, however, it must be acknowledged that progress has been made compared to the past. I am thinking, for example, of Goal 17, which acknowledges the importance of working towards the implementation of effective international collaboration between all the actors and 'stakeholders' involved, from the local to the trans-national dimension», Andreoni emphasises.

The required transformation must involve both the practical dimension – how we act – and the theoretical dimension – how we think and understand the world around us. The latter is, perhaps, the most challenging, as it will require a complete shift in our worldview. The change is going to be slow, of course, but not impossible: schools and other educational institutions, in particular, will play a central role in making this vision a reality.

«The path is now clear», Andreoni adds, «but many obstacles stand in the way. First, there is a structural problem, which is linked to the way teaching in schools and universities is organised, with the traditional separation into disciplines and courses that are still focused on subject-specific contents. Additionally, there is a problem related to the formation of the educators, who are mostly unprepared to adopt an intrinsically interdisciplinary approach. The good news is that initiatives in this direction are proliferating, and theoretical reflection on how to introduce interdisciplinarity within the educational dimension is also progressing». 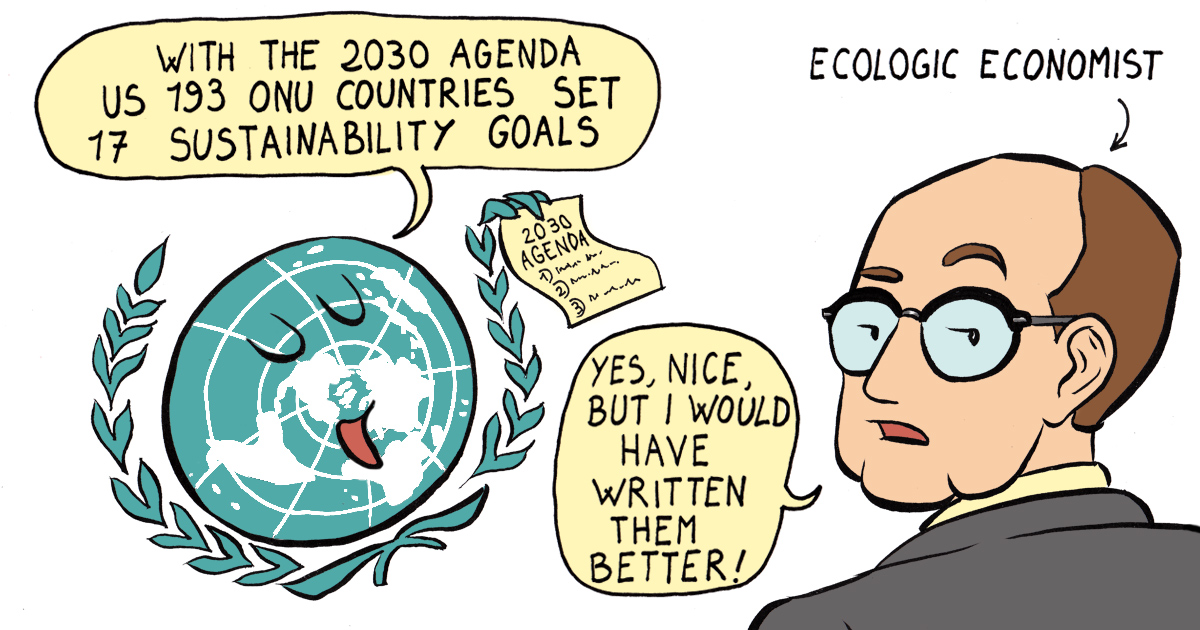 Building the capacity to understand and manage complexity is also essential for the implementation of the SDGs. Indeed, the 17 Goals are structured according to a 'horizontal' configuration, which does not recognise any priority to particular Goals or Targets. This feature, too, has received much criticism: indeed, some claim that the absence of a hierarchy that clarifies the urgency of the individual SDGs makes their implementation even more confusing, as it does not provide a uniform roadmap, so that the different actors end up working in a random order.

«This critique is actually quite easy to dismiss. The absence of a hierarchy is due to the fact that, according to the original vision of the 2030 Agenda, the world can only move towards sustainability if, and only if, we work in concert to achieve all of the Goals in time. There can be no prioritisation between the individual goals because, in a 'strong' sustainability perspective, are all considered equally important: missing even one of them would mean missing the opportunity to bring about change.

Ecological economics contends that the theoretical framework of the 2030 Agenda fails to fully recognise the primacy of the natural world, on which human well-being depends; however, this vision is implicitly embedded in the Sustainable Development Goals. More than one Goal is entirely devoted to the protection of the natural world and the fight against climate change: embedded in this call for the preservation of nature is the idea that humanity can and should embark on a more sustainable course of development».

2030, the end date of this new global roadmap, is now on the horizon. Time is running out, and there are still many things to improve. In order for this treaty not to be remembered in the future as a failure, the greatest participation possible is required: the partnership advocated by Goal 17 must involve not only states, political decision-makers, and the major actors of the global economy, but also members of civil society, associations and citizens. All of them will be key contributors: it is only through cooperation that we will be able, this time, to avoid a major setback.